The 6 Most Beloved Hot Peppers of All Time 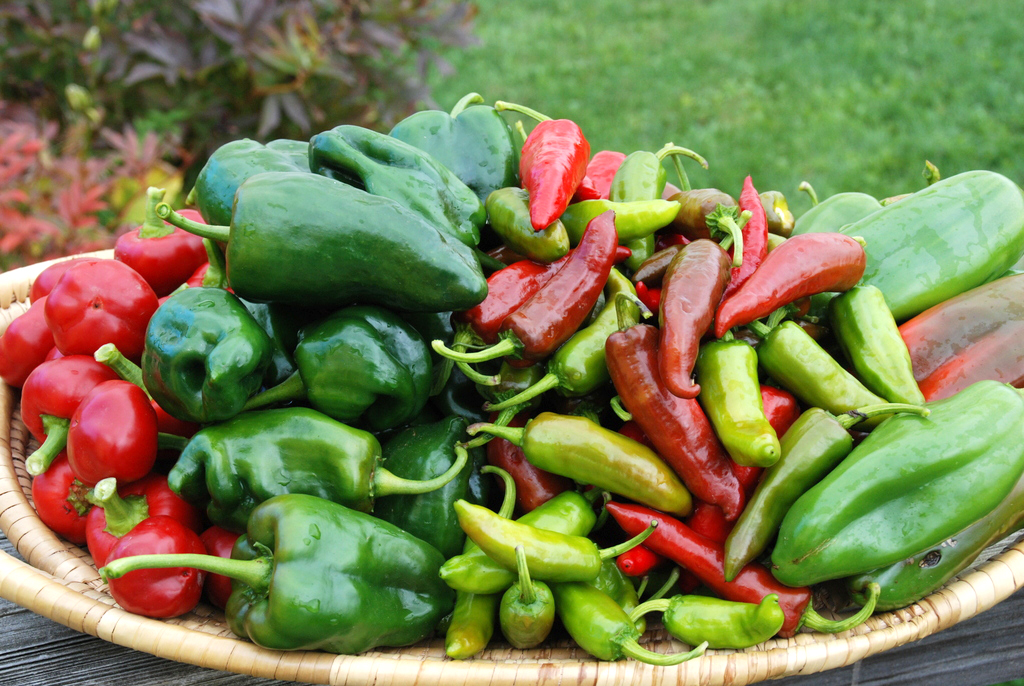 Hot Peppers of All Time

Sweet and hot peppers are indigenous to Central and South America. They have been cultivated since prehistoric times. Archaeologists have found chili peppers at sites dating to 7000 BC. The Aztecs, Incans and Mayans all cultivated peppers. The Aztecs had at least seven different words for hot peppers. We derive the term chili pepper from some of the Aztec words for hot pepper. The Incas used peppers as a form of currency.

Columbus named the peppers he saw growing in the West Indies, pimiento, because he thought they were the pimienta, spice pepper, grown in the East Indies. He was painfully surprised to find out that the West Indian peppers were incredibly hot. On his several voyages to the New World, Columbus collected many varieties of hot and sweet pepper and brought them back to Spain. The peppers immediately gained popularity and spread to Africa, India and the Far East before they became popular in the rest of Europe and North America.

Pepper plants should be started indoors 6-8 weeks before the last frost date. To start your peppers, plant the seedlings in biodegradable containers like homemade paper pots or peat pots.To minimize transplant shock, it is better to plant the seedling and its pot. Because peppers germinate slowly, pepper plants should be started with bottom heat applied to the flats. The bottom heat speeds up germination and seems to produce stronger seedlings.

When it is time to plant your peppers outside, harden off the plants for one week by placing them outside during the day and leaving them outside if the nighttime temperatures do not fall below 50 degrees. After one week of hardening off, plants should be transplanted to the garden or a container after all danger of frost has passed and the soil has warmed to a temperatureof at least 70 degrees.

Transplants in the garden should be planted 12-18 inches apart in rows 2-3 feet apart. Mix bone meal and compost or dried manure in the planting hole. If the soil is too rich or too much nitrogen fertilizer has been added to the soil, the plant will produce lush green leaves, but few peppers. As plants begin to blossom, dissolve a spoonful of Epsom salts in a spray bottle full of water and spray the leaves. The magnesium in the Epsom salts encourages early and prolific fruit set.

Peppers should be harvested when they change color from green to red, yellow, orange, purple or brown. Once the color change occurs, hot peppers become hotter. The more you pick peppers, the more they will produce. 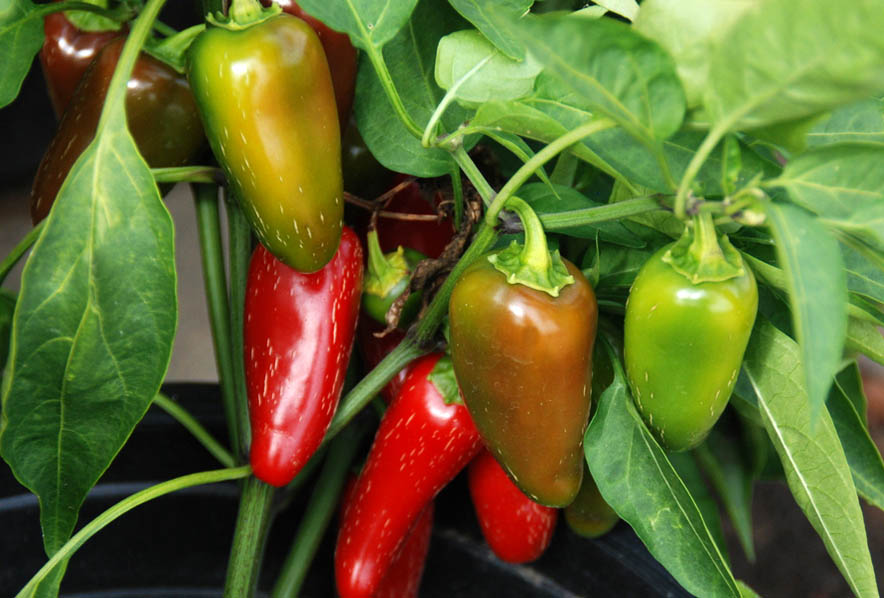 Jalapeños are probably the most popular pepper grown on this planet. More than 500 million pounds of this pepper are grown annually. The name Jalapeño is derived from Spanish meaning “from Xalapa”. Xalapa or Jalapa is the capital city of Veracruz, Mexico. When fresh, the pepper is called Jalapeño. When smoked, it is known as a chipotle pepper.

Jalapeños are medium hot, chili peppers with a hint of smokiness in theirflavor. They have been grown for thousands of years and were probably first cultivated by the Aztecs. The plants reach a height of 30-36 inches and produce 25-35 peppers.

Jalapeños freeze well, but they are most often preserved by smoking andthen storing. Smoking does tend to bring out the rich smokey flavor better than freezing or drying. Jalapeños do not dry well. 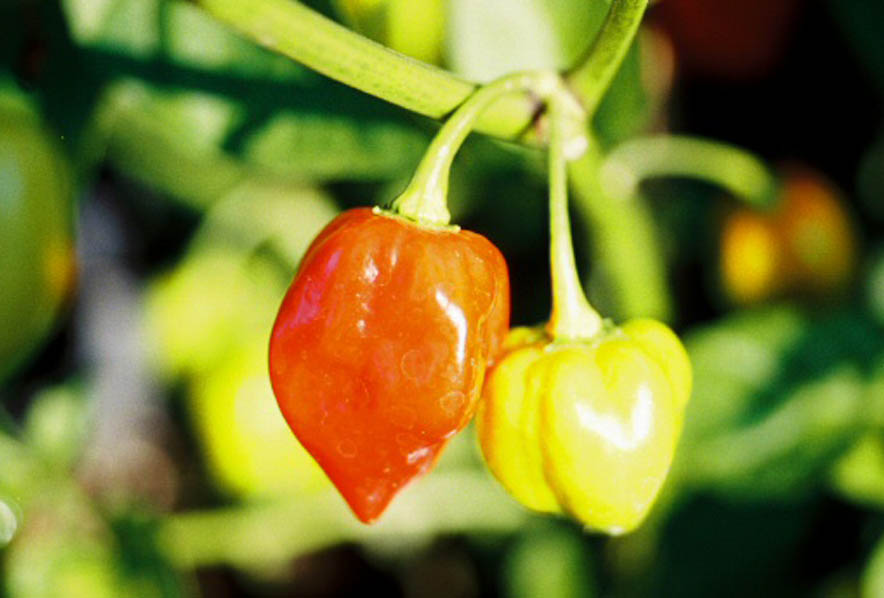 The Habanero is native to the Amazonian regions of Brazil, Peru and Columbia where it has been cultivated for thousands of years. Remains of cultivated Habaneros have been found at archaeological sites which date back 8500 years.

The name, Habanero, means from Havana which is a misnomer because the peppers are not indigenous to the Caribbean.

Habaneros are very hot, approximately 10 times hotter than Jalapeño peppers and can be somewhat dangerous for children and adults with sensitive skin. Handling a Habanero can produce skin burns. Most Habaneros are orange to red in color, but cultivars of this pepper come in all the colors of the rainbow including purple, white, green, brown and yellow.

Habanero plants can reach a height of 30+ inches and produce as many as 50 fruit, but Habaneros are particularly susceptible to blossom and immature fruit drop. When this occurs, the plants rarely produce more than 10-20 peppers. 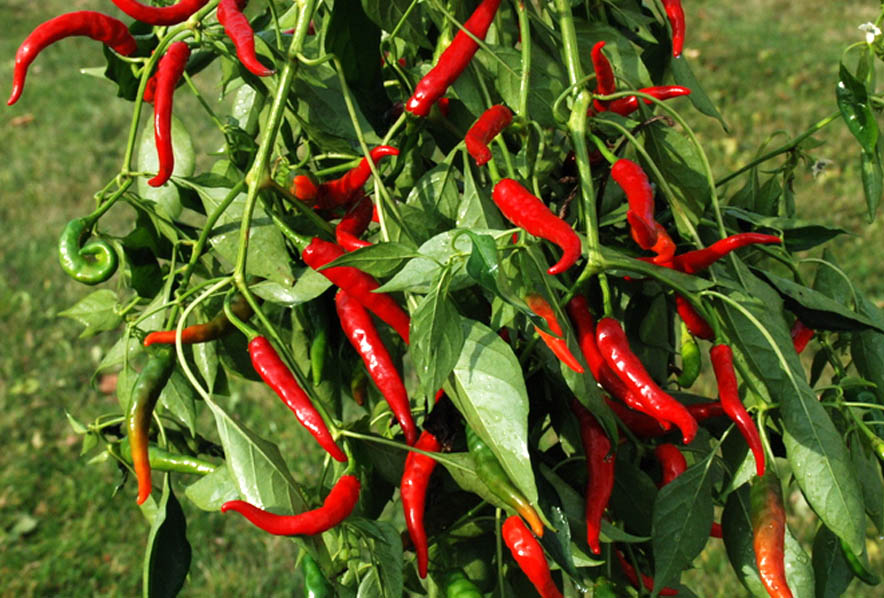 Cayenne is a chili pepper native to parts of Central and South America. It is among the oldest of all cultivated plants, having been grown for approximately 7000 years.

Cayenne was one of the first spices brought back to Europe from the New World. The historian who accompanied Columbus on his voyage, Peter Martyr, is credited with introducing Cayenne into Europe.

The pepper quickly made its way to India and throughout Asia and became an essential ingredient in many Asian dishes. Cayenne was introduced into Britain in 1548, not from the New World, but from India.

It was known and used by Americans as early as the 1700s.

The name, Cayenne, comes from the city of Cayenne in French Guiana.

This pepper dries well and is most frequently used in its dried form. It is often pounded into a powder.

The peppers grow out green but, mature to red when ripe. A single plant produces dozens of peppers. 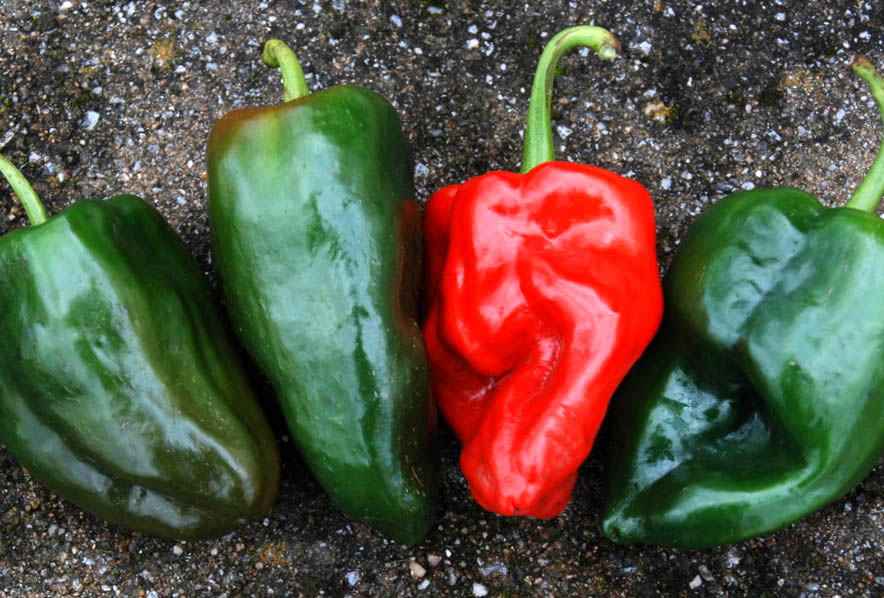 If you could only choose one hot pepper to grow in your garden, my suggestion would be to choose the poblano.

In their native habitats all peppers are perennial shrubs which can reach a height of 6-8 feet. In the temperate climates of North America, the plants rarely reach a height of 3 feet, and they die back in the fall after a frost.

Poblanos are a relatively mild, large chile pepper that is believed to be indigenous to the Puebla, Mexico region – a part of Mexico that is located in the southeastern area of the country, near, but not on the coast of the Gulf of Mexico.

The poblano fruit is about 3-4 inches wide and 5-6 inches long. The immature fruit is bright green which turns to scarlet and finishes as a deep dark red. The red is so dark that, at times, it appears black.

The fruit can be eaten at all stages of its development. The green fruit has the mildest heat, and this heat intensifies as the fruit turns to red and then deep red.

The name, poblano, refers to the fresh fruit. Once the pepper has been dried it is called an anchochile. The word ancho means wide and refers to the unusual width of the poblano.

Like some other hot peppers, the heat of individual fruit from the same plant can vary dramatically. It is not clear why this is the case, but it is. Poblanos can be eaten fresh, cooked or dried. They are especially good when stuffed and baked, and are the pepper of choice when creating chile rellenos. 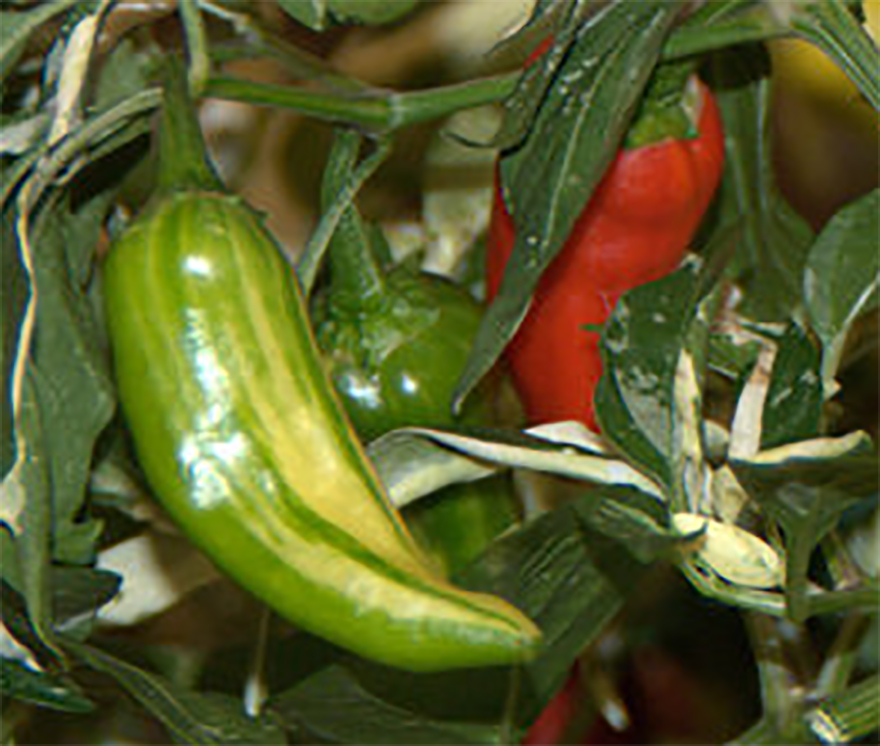 There is much pride and much sadness associated with the seed varieties that are a part of every African American’s heritage. The sad fact is that a significant component of the African American diet was what was left over after the family of the plantation owner had finished their meals.

The amazing fact is what the African American women, with their extra-ordinary knowledge of herbs, vegetables, fruits and grains, could do to enrich the flavors of the foods they served their families.

The Fish Pepper is a very rare variety that probably originated in the Caribbean. It is quite hot, but not as hot as a habanero. The leaves of the plant are variegated – white and light green. The peppers, at maturity, are the size of pepperoncini.

With this plant there is something different every day. Its beauty and its interesting behavior make it an exceptional edible ornamental.

It is called a fish pepper because African American women often added this pepper to fish stews. The heat of the pepper intensified the flavors and masked any unpleasant aromas that might have originated from day old fish flesh.

The Fish Pepper plant is a stunning testimonial to the ingenuity, creativity and courageous will to survive of the African Americans of the 1600s, 1700 sand 1800s. 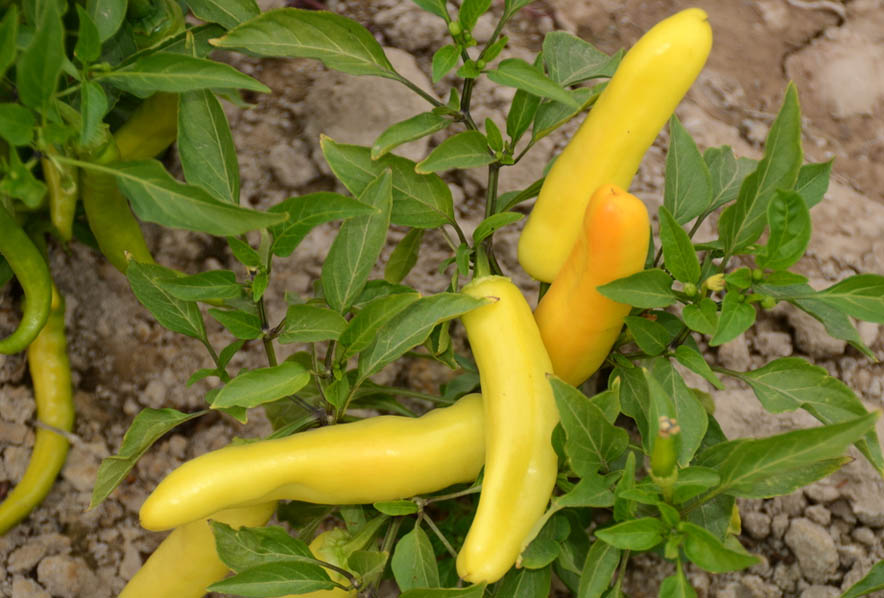 Peppers, like their cousins tomatoes and eggplants, perform best in containers. If you are going to grow peppers in containers, there are a few rules you should follow.

Peppers should be grown in pots that are at least 14 inches in diameter and 10-12 inches deep: ONE PLANT PER CONTAINER.

The absolutely best soil mix for containers is 60% crummy backyard soil, 20% peat moss and 20% dehydrated cow manure or, even better, compost. If you blatantly refuse to use backyard soil then purchase topsoil (not potting soil, special soil mixes, premium soil). Mix the ingredients together and pour into a pot.

Most peppers require staking, so plant the stake when you plant the seedling.

Container grown peppers must be fertilized at least every 2 weeks with full strength fertilizer that is rich in phosphorus. Tomato plant food does a goodjob. Plants that are not fed in this way will have limited fruiting.

The Hungarian Hot Wax Pepper is another very old pepper that was native to the southernmost areas of North America. It was introduced into Central Europe, primarily Hungary and Serbia in the 1600s and quickly became a staple of the Hungarian diet. It was re-introduced into the United States in the 1930s where it rapidly increased in popularity.

The fruit is red at maturity, but begins green, then turns to yellow, then to orange and finally to red. As it ripens it becomes hotter. Most Hungarian Hot Wax peppers are harvested when they are yellow and thus only slightly hot.

The 36 inch plants are incredibly, and I mean incredibly, prolific. A single plant can easily produce 30, 6-inch long fruit which is why I recommend it as one of the best pepper plants for containers.

Peppers are not the best vegetable to start with when teaching children to garden, because they take a long time to produce and, for children, they are not very interesting. We consider ourselves to be a “family-oriented” seedhouse, and some of the truly exotic hot peppers are actually dangerous to have around children. If, after touching one of these peppers, a child rubs his/her face or eyes, they can sustain a pretty bad burn.

We do offer some habaneros and Thai peppers that can burn, but we try to caution parents to be careful when growing these peppers around children.

Most American vegetable gardeners consider hot peppers an essential part of their seasonal vegetable garden. Peppers, fresh from the garden, like tomatoes, have flavor and texture that cannot be duplicated in a grocery store pepper. Few vegetables are as nutritious, and few vegetables enjoy being home bound in a container more than peppers. 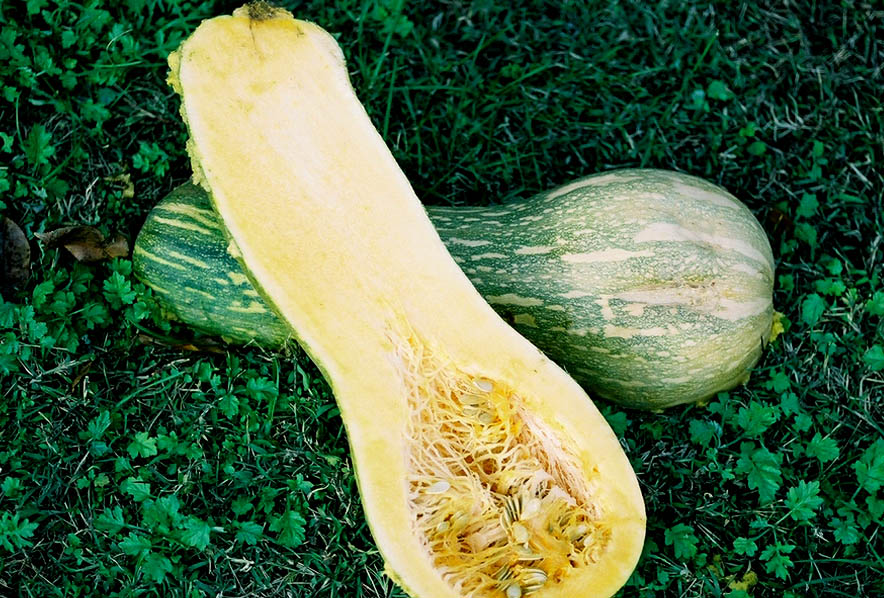 Don’t miss our Tueday, 2-26-2019 newsletter. In recognition of Black History Month,this newsletter will tell the stories of 8 vegetables/herbs that have nourished African Americans for more than 3 centuries.