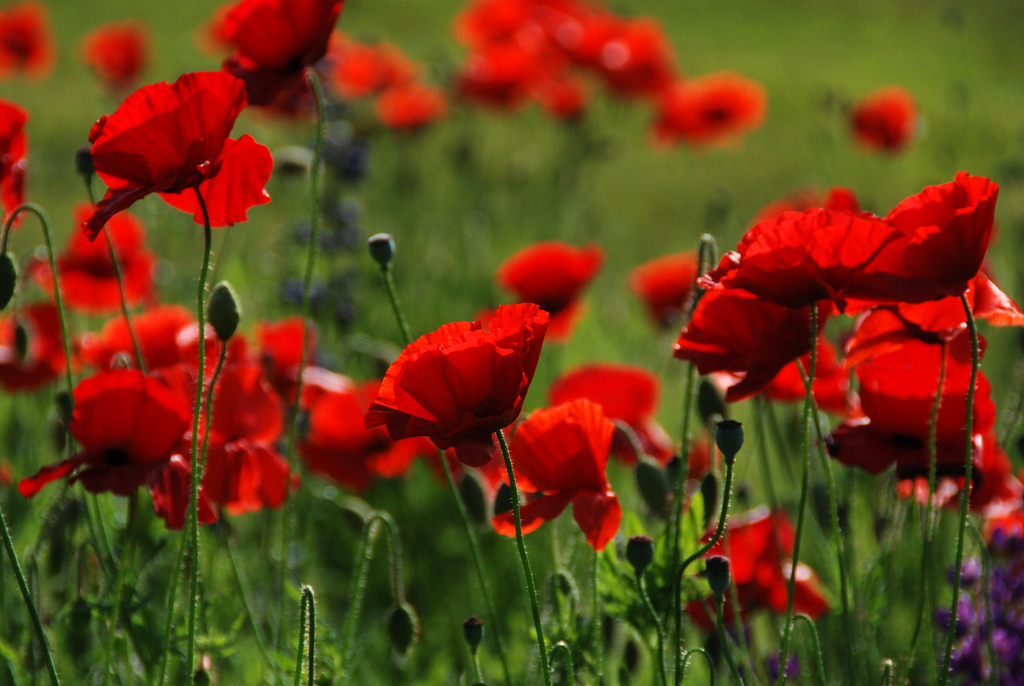 The Memorial Day Flower:
The Story of
The Red American
Legion Poppy

Several years ago, the individuals who own Harvesting History decided to begin an American history honoring tradition. Throughout the year, on those holidays that celebrate historical American events, Harvesting History would publish a newsletter that described the significance of some aspect of horticulture as it related to these events. As a result, every Memorial Day weekend, we publish the story of The Red American Legion Poppy. 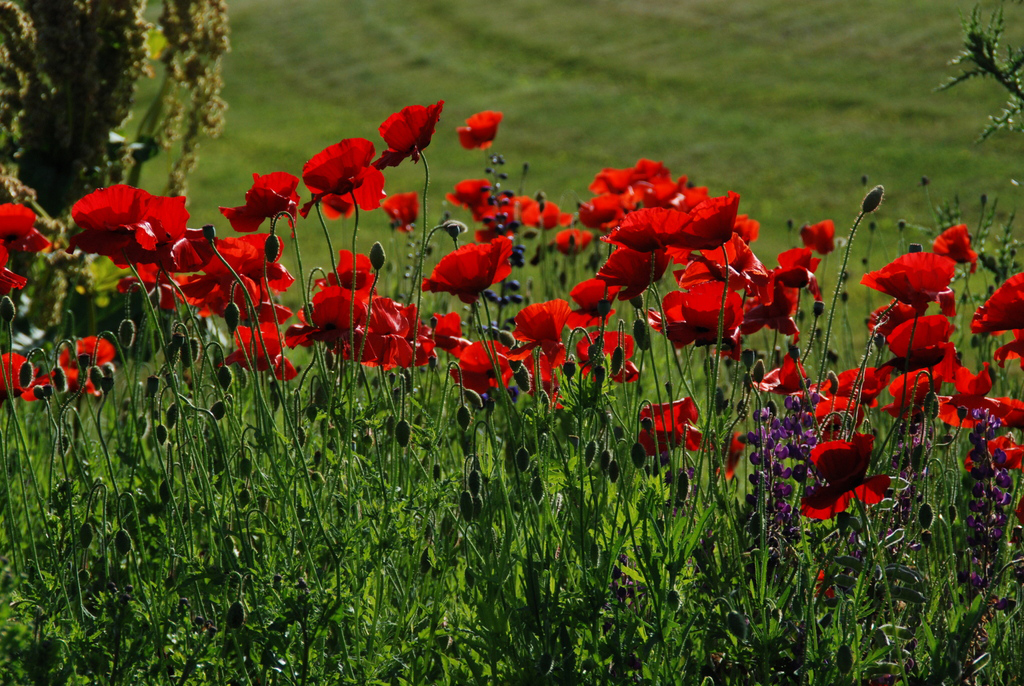 This Memorial Day is arguably like no other that most of us have experienced in our lifetimes. On this 2020 Memorial Day, we honor so many who have given their lives so that the rest of us may live in an America that loves, respects and understands how precious the gift of freedom is. We are honored and humbled to share with you the legend of The Red American Legion Poppy,  and as long as Harvesting History exists, each Memorial Day we will remind all of you of the significance of this holiday. 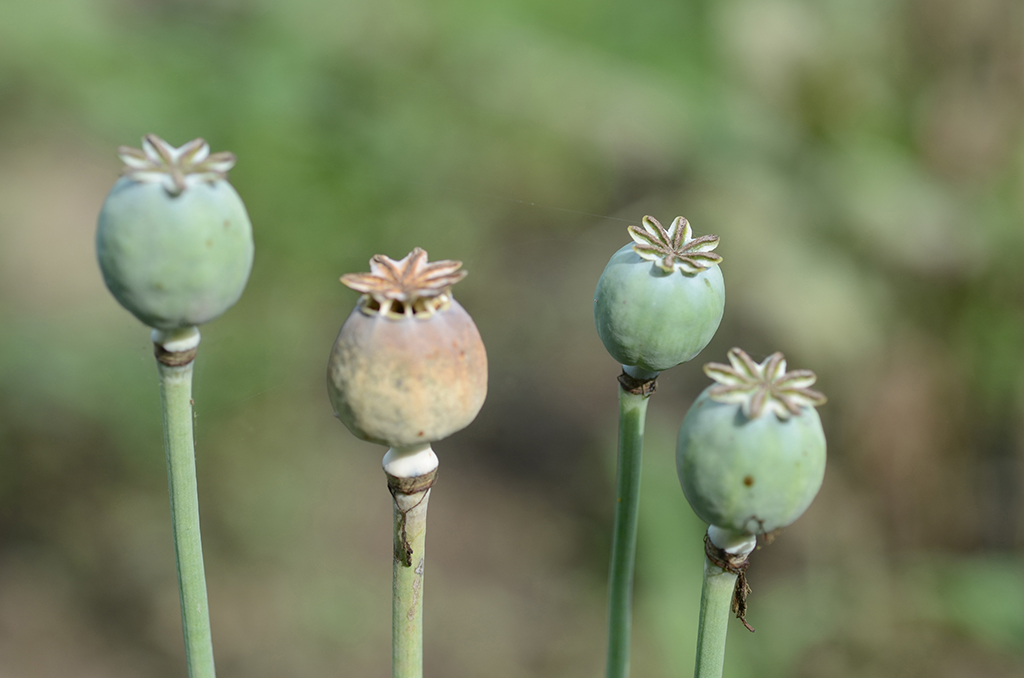 Poppies are native to the temperate regions of the world and have been known and cultivated for thousands of years, primarily for medicinal purposes. There are more than 50 species of annual and perennial poppies native to Europe and at least 100 varieties that are indigenous to other areas of the Northern Hemisphere and California, in particular. The Romans are believed to have introduced the poppy into Great Britain. The Latin name, Papaver, comes from the word, Pappa which means milky juice.

The plants have a long history in the mythology and legend of most Western cultures. They were recognized as symbols of fertility (a single seed pod can contain as many as 32,000 seeds), fecundity and also death – used as a token of remembrance. In 1794, the Opium Poppy was grown for the first time in Great Britain for commercial purposes. Prior to this the same poppy had been a popular cottage garden flower grown exclusively for its floral beauty. The narcotic properties of the Opium Poppy have greatly overshadowed the value of this plant. Humorously, it is legal to sell opium poppy seeds in the United States, but it is illegal to grow them. In the western United States, it is said that the first Red American Legion poppy sprung up on the battleground where Custer died and for that reason, the poppy is often called Custer’s Heart. 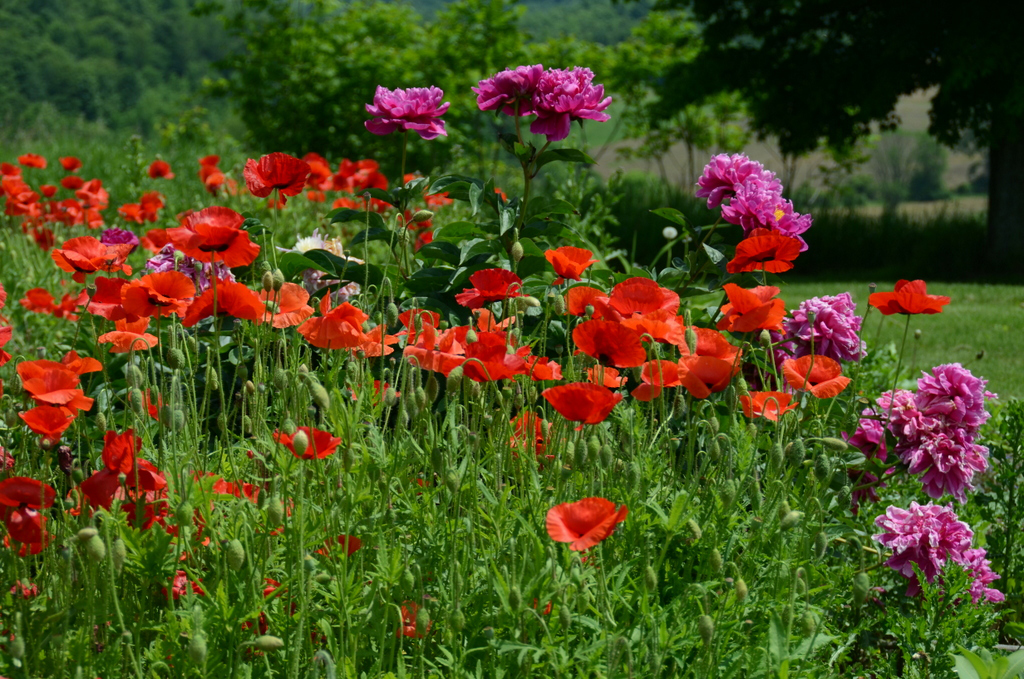 Of all the stories and legends that I know about specific flowers, vegetables and herbs of this world, the story that moves me the most is the story of the Memorial Day Flower, the Red American Legion Poppy, also known as The Flanders Poppy or the corn poppy.

This poppy is an ancient plant that is native to Europe, Asia and Africa where it grows wild and abundantly. The Red American Legion Poppy has many unique characteristics, but one of the most unusual is that the seed of this poppy can lay dormant beneath the surface of the soil for many decades. This dormancy can only be broken if the soil is disturbed in a violent upheaval. 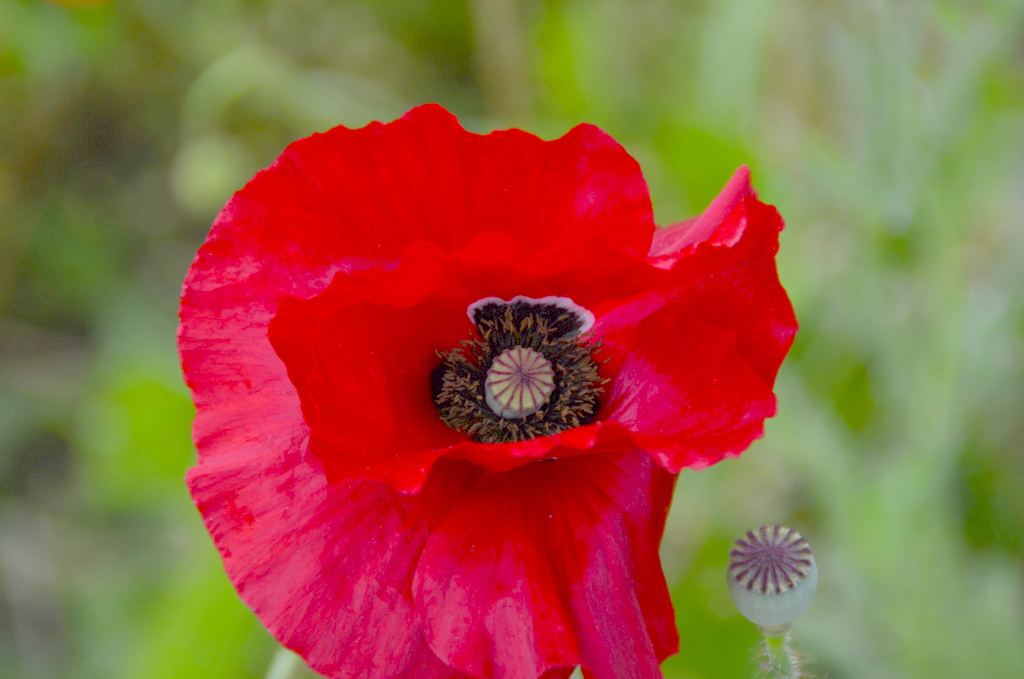 The Red American Legion Poppy is an annual, but it is such a prolific re-seeder that many people think it is a perennial. Interestingly, this poppy goes where the wind blows. In my garden, I plant new seed about every 5 years.  During the course of the five years the wind blows the drift of poppies around 2/3 of my garden. Each year the main group is in a different location.  I get such a kick out of watching where they show up each year!

In hardiness zones 7-8, the Red American Legion poppy can grow in dappled shade if planted in November or December or refrigerated for 10 weeks. In hardiness zones 1-6, it can be grown, but in these zones it does best when sown in the fall, September through December. 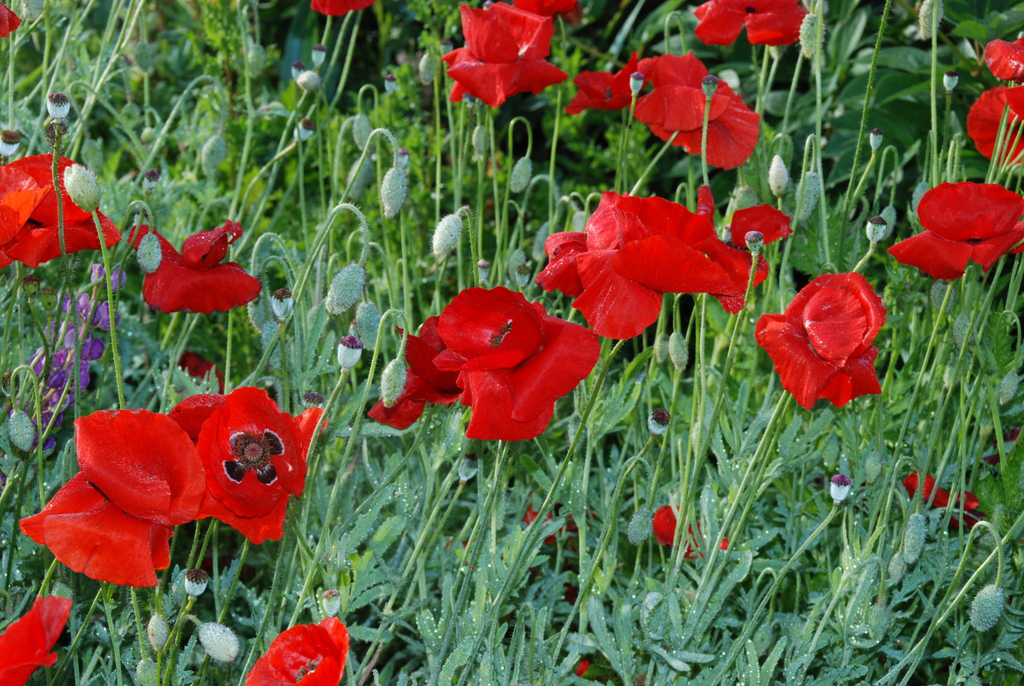 On September 27, 1920, The American Legion adopted the poppy to commemorate those who gave their lives to protect our freedom.  The Red American Legion Memorial Day legend, that I refer to, however, begins in Europe. This poppy which was native to France once covered the fields above the cliffs on the coast of Normandy with intense scarlet blossoms, but as these lands became farmland, the poppies disappeared.

It is said that as the Allied Forces crested the cliffs on D-Day, they were met with a vision of thousands of blooming red poppies across acres and acres of what had once been French farmland. 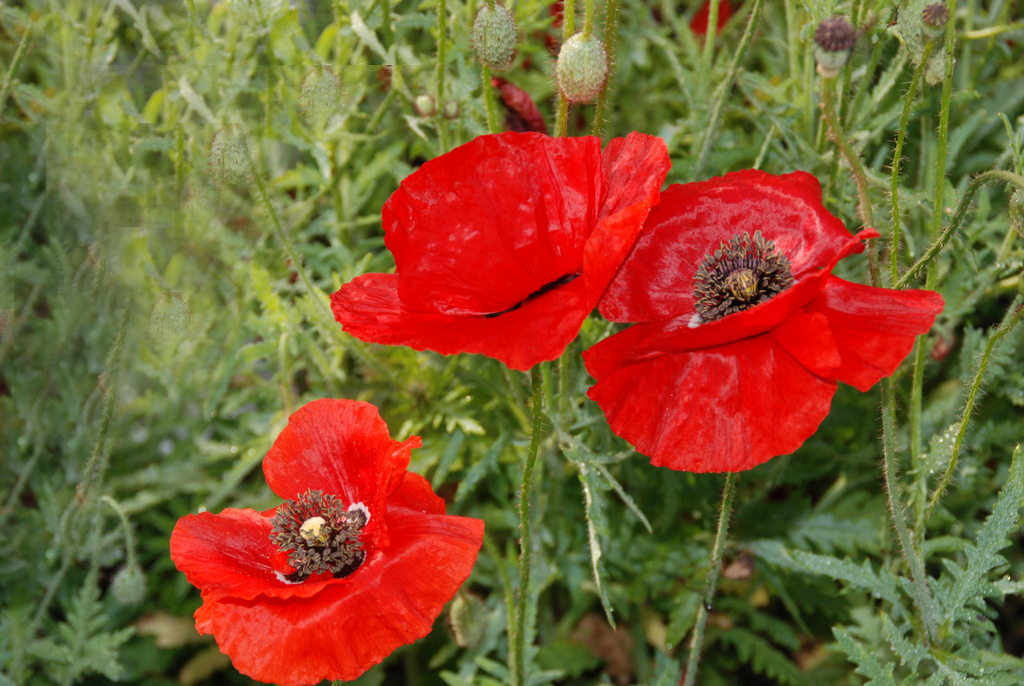 Because of this story, the poppy has become known as The Red American Legion Poppy and it is the reason why on Memorial Day, each year, at parades to honor the Americans that made the ultimate sacrifice so that the rest of us could live free, that poppies are distributed. 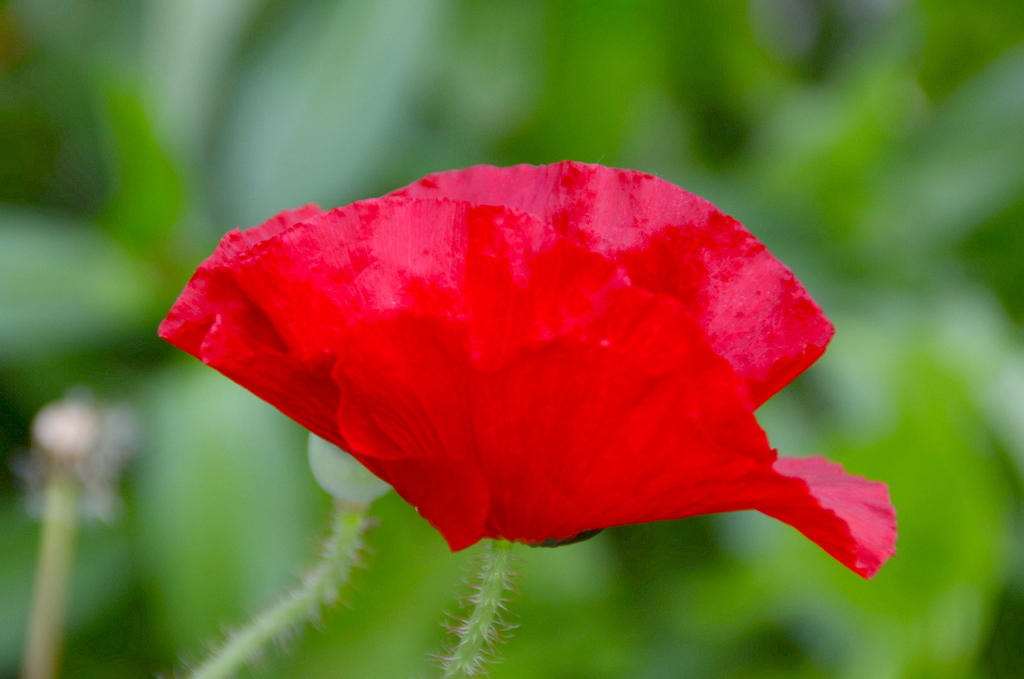 I do not know how much truth there is to this legend, but I am sure there is some, and of all the ways that we can commemorate the sacrifices of those who have given their lives to protect our freedom, the growing and sharing of a flower may be the best.

May each of you enjoy this Memorial Day. My hope is that all of you will take at least a moment this weekend to murmur a prayer of thanks for those who have given their lives, their limbs and/or their sanity so that the rest of us may enjoy the blessing of freedom.

Never forget, “Freedom Is Not Free”

If you share these newsletters with your friends, colleagues and/or
family suggest that they sign up directly for the newsletters at:

You must scroll down to the bottom of the homepage to find the
newsletter link. This is what the section looks like:

You may now “Opt In” for
Newsletter and Updates
at the bottom of your
order form by clicking on the check box.