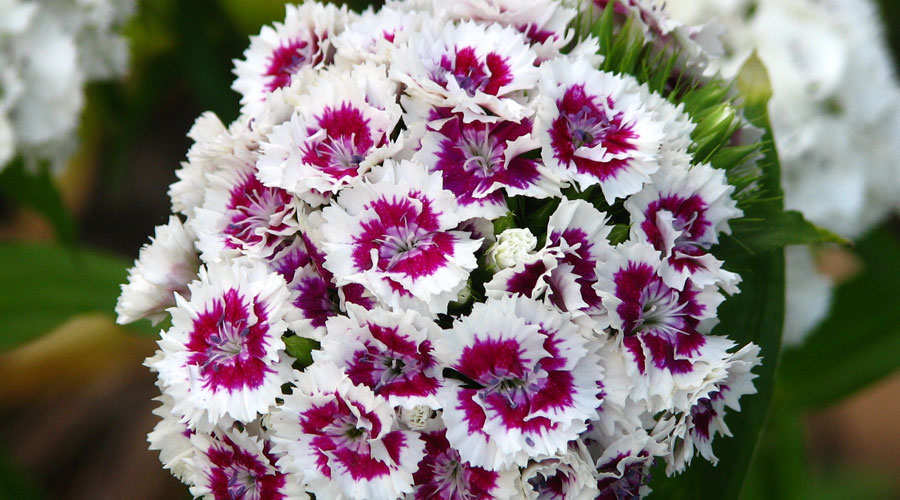 Sweet Williams, members of the Dianthus family, specifically Dianthus Barbatus, have been cultivated for at least 1000 years. It was the Athenians that named the flower Dianthos, from the Greek words dios (devine) and anthos (flower), but the common name, Sweet William, has a much more confusing past. Most plant historians believe that the plant is named after William the Conqueror, the conqueror of Normandy, because the plants were said to grow, “aplenty in the hills of Normandy”. Some, however, feel that the plant was named in honor of William of Aquitaine – the Saint, and still other believe that the name was a tribute to William Shakespeare who seemed to have a high opinion of the plant as is reflected in this quote by him about the plant, “for decking gardens as well as personal adornment”.

Sweet Williams are tender perennials, but many gardeners treat them like biennials replanting every two years. They are known to have originated in the Pyrenees and the first written British reference is a note from the court of King Henry VIII ordering Sweet William roots to plant at his newly acquired castle at Hampton Court. The single Sweet Williams were commonly cultivated by most households in England for hundreds of years. Double varieties were much rarer, but they did exist as far back as the 16th century.

Joseph Breck in his 1851 book, The Flower Garden, had very definite opinions about Sweet Williams, “A bed of fine varieties presents a rich sight; it sports into endless varieties, viz., white, pink, purple, crimson, scarlet, variously edged, eyed and spotted. There are also double varieties, but they are no improvement over the single.”

Sweet Williams started from seed are best started indoors 6-8 weeks before the last frost. Cover the seeds with about 1/4 inch of soil and keep the soil slightly moist throughout germination and indoor growth. The seeds will germinate in less than 2 weeks. The plants require full sun except in the deep South where they do best in partial shade. They like rich, sandy loam soil. Plants should be about 6-8 inches apart. Flowering begins in July. Sweet Williams can also be started outside after the danger of frost is passed. The plants will bloom the following year. Both doubles and singles love to have lime added to their soil.