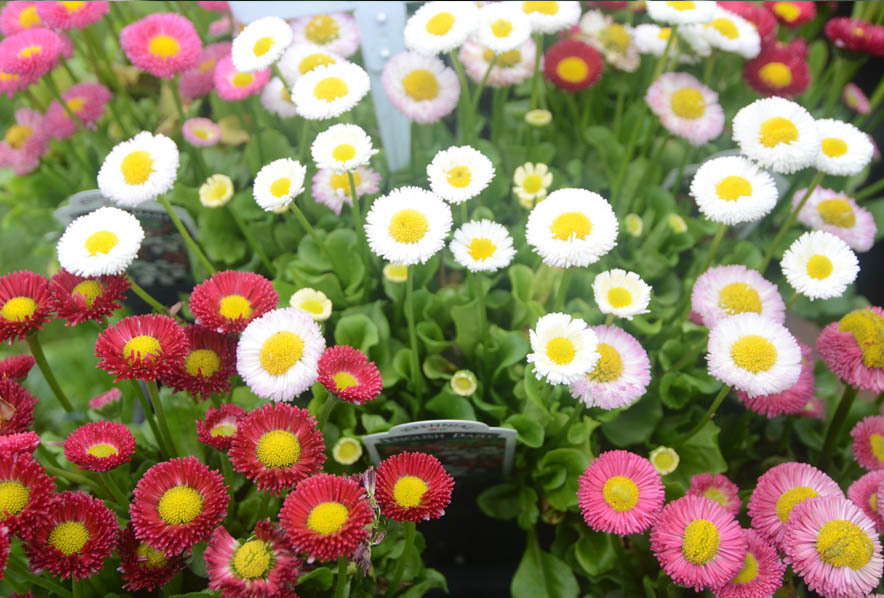 THE SEEDS DISCUSSED IN THIS NEWSLETTER AREA
VAILABLE ON OUR WEBSITE AT THE FOLLOWING LINK:
https://harvesting-history.com/product-category/seeds/flowers/perennial/

The English Daisy, Bellis perennis, (pictured above) is native to parts of Europe and the Mediterranean but was carried to North America by the earliest colonists. It has been a part of our horticultural legacy for as long as the United States has existed. This plant is a tender perennial, but it is often grown as a biennial. The blossoms can be red, white, pink, burgundy, red tipped or pink tipped, etc.

You can spread the seed in late fall and allow it to germinate in the spring. In times long past, the seed was started in August-September in a cold frame and the young plants were kept in the cold frame until spring. To germinate, broadcast the seed and cover with 1/2 inch of soil. The plants can be grown in partial shade or full sun, but do best in partial shade. 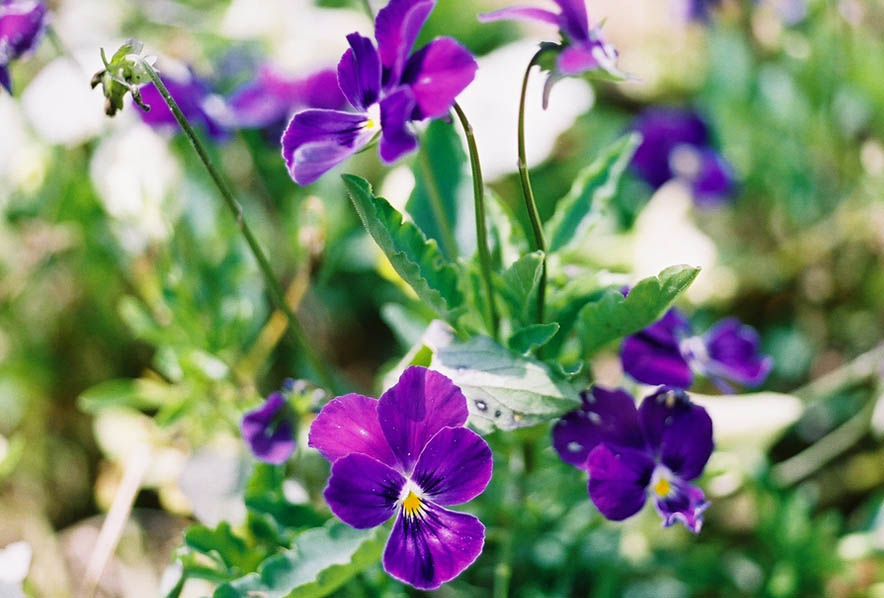 Violas are one of the signature heirloom flowers of this world. There are more than 500 known species, and they are indigenous to every continent except Antarctica. According to Tovah Martin in her book, Heirloom Flowers,“They were among the first flowers to be grown commercially, sold in the Athens markets in 400BC.” Near the end of the 19th century in America, violets were so popular that huge violet farms existed near all of the major cities to supply fresh flowers to the markets. San Francisco boasted the most famous of these farms and along the Hudson River near New York City, vast greenhouses grew the plants throughout the winters. Joseph Breck in his landmark book, Breck’s Book of Flowers, charmingly discusses the attributes of these flowers,

“…an old acquaintance with everyone who has had anything to do with a flower-garden. It begins to open its modest, but lively flowers as soon as the snow clears off in the spring, and continues to enliven the garden till the snow comes again.”

Johnny Jump Ups are hardy, but short-lived perennials that require some shade to perform at their best. The flowers are small, 3/4 inch, miniature pansy-like blossoms that range in color from white to yellow to purple to blue and occasionally a pinkish purple. Seeds can be planted in the fall for spring blooms or the spring for summer and fall blooms. In many areas of the United States, with the mild winters, these plants will bloom throughout the winter. Cover the seeds with 1/4 inch of soil and keep the area slightly moist until germination which can occur in 14-21 days. Thin seedlings to 4 inches between plants. The plants will become dormant in the heat of the summer, but will begin to bloom again when it cools off in the fall. They prefer a highly composted soil and are hardy from Zone 3 to Zone 9. 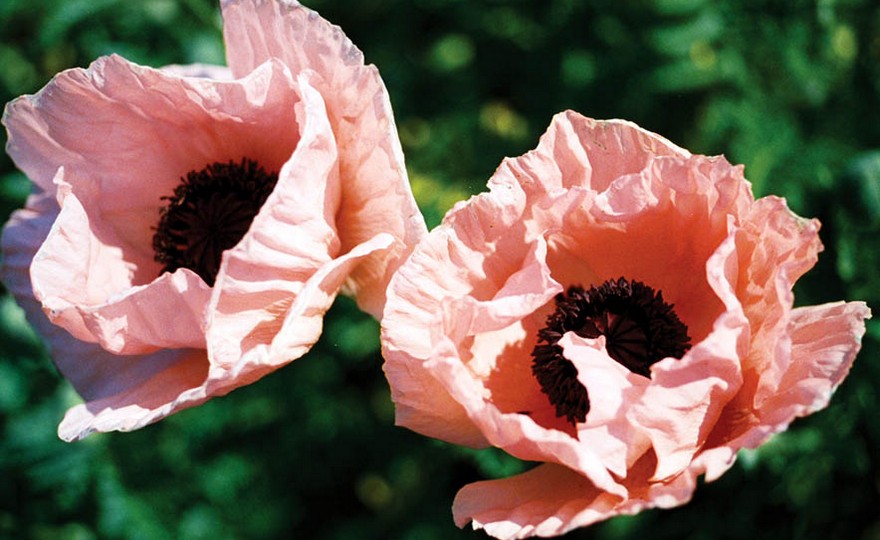 Poppies are native to the temperate regions of the world and have been known and cultivated for thousands of years, primarily for medicinal purposes. There are more than 50 species of annual and perennial poppies native to Europe and at least 100 varieties that are indigenous to other areas of the Northern Hemisphere and California, in particular. The Romans are believed to have introduced the poppy into Great Britain. The Latin name, Papaver, comes from the word, Pappa which means milky juice. The plants have a long history in the mythology and legend of most Western cultures. They were recognized as symbols of fertility (a single seed pod can contain as many as 32,000 seeds), fecundity and also death – used as a token of remembrance.

In 1794, the Opium Poppy was grown for the first time in Great Britain for commercial purposes. Prior to this the same poppy had been a popular cottage garden flower grown exclusively for its floral beauty. The narcotic properties of the Opium Poppy have greatly overshadowed the value of this plant. Humorously, it is legal to sell opium poppy seeds in the United States, but it is illegal to grow them.

The Iceland Poppy, Papaver nudicaule, a perennial, is believed to have originated in Siberia. Early forms of the plant grown in the late 18th and early 19th century produced yellow blooms – with one exception, a rare scarlet form. Horticulturalists in the late 19th century were able to produce a variety of colors, the most popular being a salmon pink. Breck describes the plant as

“… two or three varieties with yellow, and one with scarlet flowers,
from Siberia, one foot to one and a half high.” 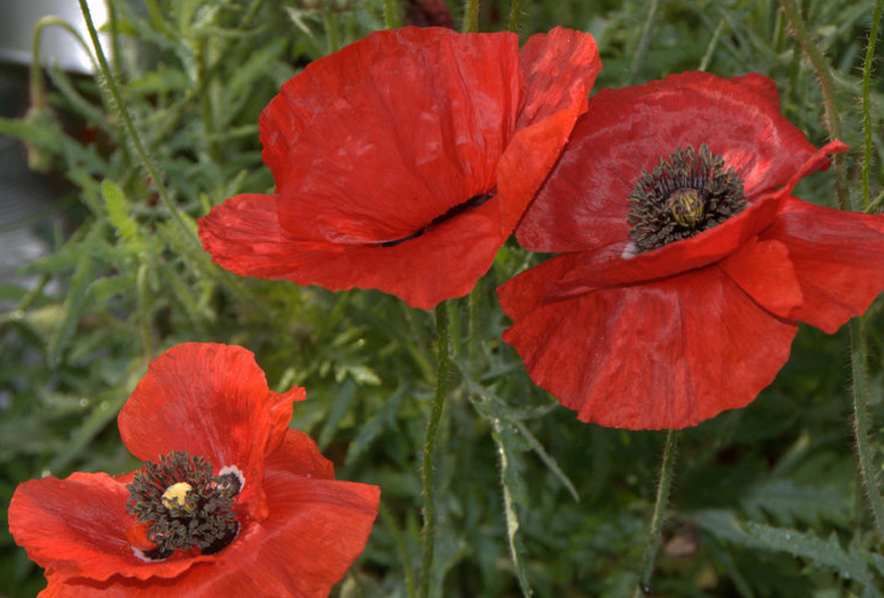 The Oriental Poppy, Papaver orientale, a perennial, was sometimes known as the Eastern Poppy and originated in Eastern Europe near the borders of Persia and Afghanistan. It was introduced into Britain in the early 18th century. Breck describes the plant as,

“…a most magnificent perennial, worth all the rest of the Poppy tribe.
Its large, gorgeous, orange scarlet flowers, display themselves in the
month of June. The bottoms of the petals are black; the stigma is
surrounded by a multitude of rich purple stamens, the antlers
of which shed a profusion of pollen…A clump, with twenty or
thirty of these flowers, makes one of the most conspicuous and
showy ornaments of the garden…”

Poppy seed is some of the most extraordinary seed known to mankind. Seeds can be stored or buried for sometimes hundreds of years and yet will germinate when the soil is turned or the seeds are exposed to light. The annual varieties require full sun, but the perennial varieties prefer partial shade to full sun. Poppies do not like to be transplanted so sow the seed where the plants are intended to grow. Seed sown in the late fall, generally, does better than seed sown in the early spring. Cover the seed with a light dusting of soil – no more than 1/8 of an inch. OR, wait for a snowfall of at least 4 inches and broadcast the seed over the snow. As the snow melts, it will carry the seed into the soil to a perfect depth. Thin seedlings to 10-12 inches. The plants bloom in June and early July. 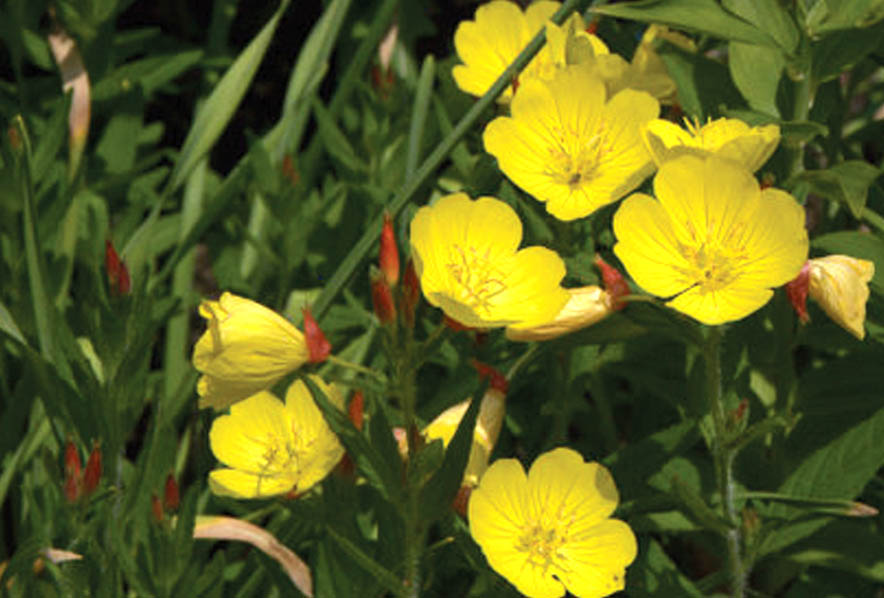 Evening Primrose, also known as Sundrops, are hardy perennials which were discovered in North America and brought to Europe in the early 17th century where they quickly became a cottage garden favorite because of their showy yellow flowers which burst into bloom just as the sun was preparing to set. The original favorites were Oenanthera macrocarpa, a 3-4 foot plant which produced brilliant yellow 3 inch flowers. The French liked to eat the first year roots, preparing them as if they were salsify. The macrocarpa eventually fell out of favor because of their size and the room they needed in the cottage garden and were replaced by Oenanthera fruticosa, the 18-inch high, yellow flowering variety that we are familiar with today.

Joseph Breck in his 1851 book, The Flower Garden, described five varieties of Evening Primrose varying in size from 6 inches to 4 feet in height with yellow or white flowers. He stated,

“All the species succeed well in any common garden soil, and easily propagated
from divisions of the root, and from seed when it can be obtained.”

To obtain blossoms in the first planting year, seeds must be sown in the fall. They can also be started indoors in early spring and then transplanted outside. Seeds should be planted 1/2 inch deep. They will germinate in less than 14 days. Young plants form rosettes which then produce flowering stems. Seeds started in the fall will produce rosettes which die back with the heavy frosts and then re-emerge in the spring. Thin plants to 6-inch separation. Evening Primroses are heat and drought tolerant and the deer do not seem to like them. They will spread aggressively in the garden but can be easily maintained by pulling the plants up by their roots. 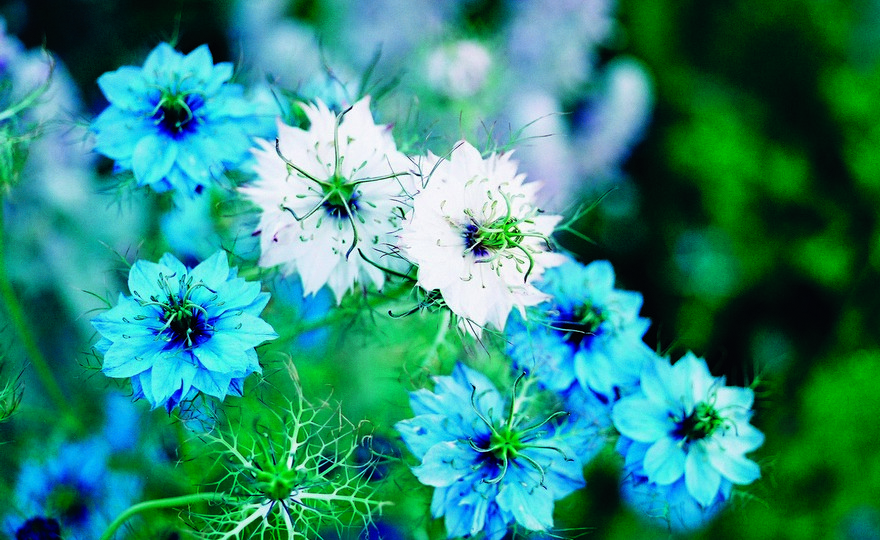 Nigella, also known as Love-In-A-Mist, Jack-In-The-Green or Lady-In-The-Bower, is an annual and member of the Ranunculus Family. It is native to southern Europe and the northern regions of Africa. It has been cultivated in British and European gardens since 1548, but it has been known since Biblical times when in Isaiah 28:27, it was called the “Bitter Fitch”.

The name Nigella comes from the word, niger, which means black. It refers to the color of the seeds which are used in medicinal and culinary applications. The seeds, when crushed into a paste, were used to banish freckles. The leaves are used in various recipes as an aromatic.

The plant was introduced into the United States by colonists in the 1600’s. The colonists cultivated the plant for its exotic looking blossoms that made excellent cut flowers and for its seeds and leaves which they used in their cooking. Joseph Breck in his 1851 book, The Flower Garden, described the plant in this way,

“…The species are curious or neat little plants, with fine-cut leaves,
like fennel…In some parts of Europe, the leaves and seed…are used in
cookery, instead of more expensive aromatics. They are also said to be
extensively used in the adulteration of pepper…Flowers in a leafy involucre.”

The original Nigellas were 2 or more feet tall and produced blue flowers. By the end of the 16th century, a white flowering Nigella had been developed along with double flowering forms. Plants today are much shorter, approximately 8 inches, and come in a variety of colors including pink, rose, white, blue and purple. The seed pods which resemble tiny blowfish are easy to preserve and provide dried arrangements with some exotic interest.

Nigellas are very easy to grow from seed. They perform best in poor soil and full sun and they are prolific reseeders. Once established, they tend to perpetuate themselves year after year. For best results, plant the seeds in the fall no more than 1/2 inch deep. In the spring, thin seedlings to 10-12 inches. The plants will begin to bloom in late July or early August. If deadheaded regularly, they will continue to bloom until frost. For drying, deadhead until the last flowers have bloomed and then let these flowers produce the seed pods for drying. Seeds can also be planted in early spring, but plants will bloom very late and may not bloom at all. 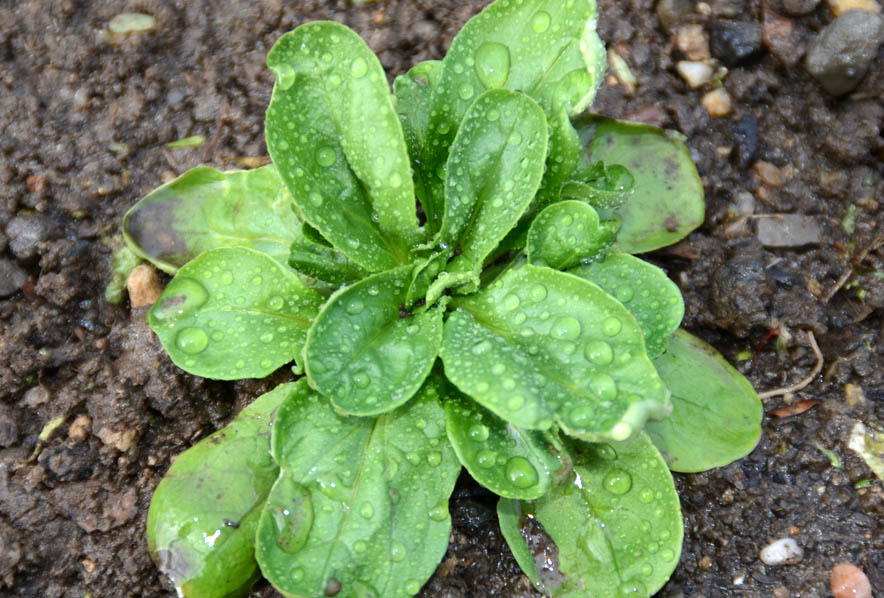 On Tuesday, November 5, 2019, we will finish our short
series on vegetable and flower seeds that should be
planted in November and December. You will not believe the
seeds that do best when planted during those two months.