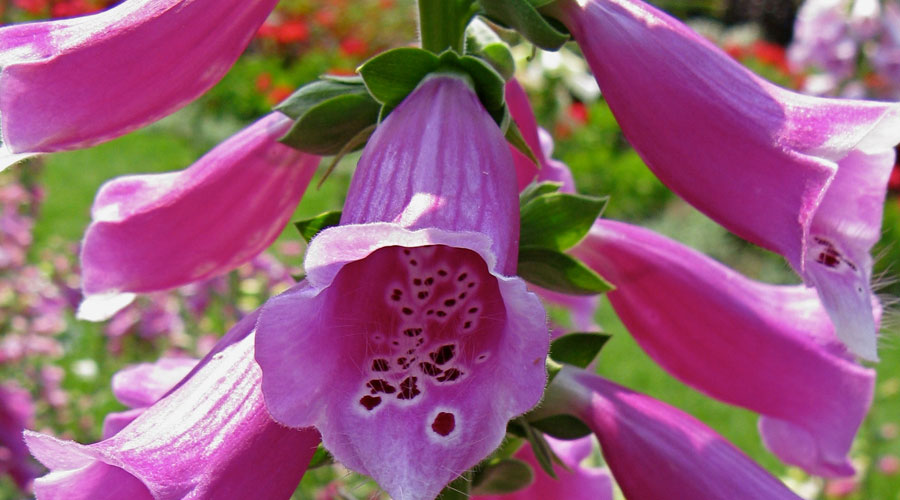 Foxglove, also known as Digitalis, Fairy’s Gloves, Witches’ Fingers, and Fairy Thimbles is one of the most beloved of all garden flowers despite being poisonous, short lived and a brief bloomer. The plant is a biennial native to Europe, North Africa and Central Asia. The common name, Foxglove, refers to the fact that the spire of blossoms resembles clusters of gloves and the areas where Foxgloves grew naturally were thought to be inhabited by fairies. Thus the plants were thought to be fairies’ gloves. The Latin name, Digitalis, comes from digitabulum which means thimble and refers to the shape of the individual flowers.

The plant had been known as far back as 1000AD. It has been cultivated since the 1400’s in England, but was not grown in American gardens until the 1700’s. Joseph Breck in his 1851 book, The Flower Garden, describes five varieties with the most popular being Digitalis purpurea, the purple foxglove. Breck writes, “The plant is a violent poison, but invaluable in medicine. It is suitable for the border, and may be introduced into the shrubbery with fine effect, as its tall, spire-like spikes, crowned with its large thimble or bell-shaped purple or white flower, will finely contrast with the green foliage of the shrubs.”

By the late 1700’s, the plant’s value as a heart stimulant was well known, and it had become a valued medicinal plant as well as a garden flower. The discovery had been made by a British Dr. William Withering in 1785 when he had tried but failed to relieve a woman who appeared to be dying from dropsy. Weeks later, he was informed that the woman had been cured by drinking an herbal tea. Withering found that the ingredient in the tea was foxglove and the active ingredient that had cured the woman was digitalis. That same year he published, An Account of the Foxglove. This book propelled digitalis to the forefront of treatments for the heart.

The English used foxgloves for many medicinal ailments including coughs, epilepsy and swollen glands. One of the curious stories associated with the plant involves Vincent Van Gogh who was believed to have taken the drug for his epilepsy. One of the side effects of the drug is yellow vision, and it is believed that this yellow vision greatly influenced Van Gogh’s art and was the reason he so often selected the color yellow for his paintings.

Foxgloves are difficult to grow from seed and do not transplant well. It often takes years to establish a healthy grouping of the plants. It is recommended that seed be planted in the fall, but it can also be planted in the early spring. During the first year, if the seed germinates, it will form a rosette or low mound sometimes 10 inches in diameter. Seed can remain dormant in the ground for years so do not be surprised if little or no germination results from the initial seeding. Seed needs light to germinate so just press the seed into the moist soil, but do not cover it. Plants should be thinned to 10-12 inches. Foxgloves love heavy feeding with manure or a tea made from comfrey leaves. Blooms only last for a week to 10 days. The plants bloom in July.