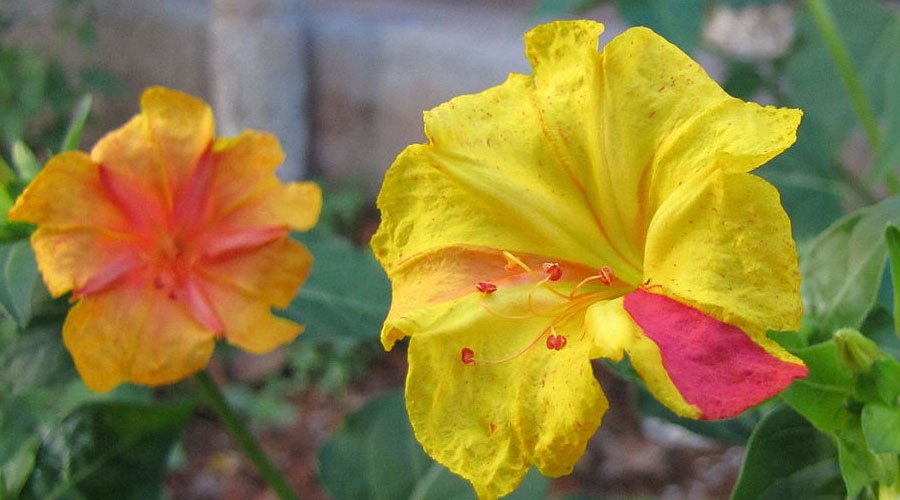 Four O’ Clocks, also known as Marvel of Peru, False Jalap and Belle De Nuit, is native to the tropical Americas and was introduced into Spain and then England from Peru in the 1500’s. The name Marvel of Peru refers to the way in which people marvel when the plant bursts into bloom at exactly 4 o’clock. The old varieties have a fragrance reminiscent of citrus. The plant produces trumpet shaped flowers in a variety of striking colors including magenta, yellow, rose and white. There are also old varieties producing bicolored and flecked blossoms. Plants can also produce blossoms of varying colors on a single plant. This usually occurs in the cooler climates of Northern Europe and the Northern United States.

The plant was introduced into the United States in the 1700’s but did not become popular until the mid-19th century. Thomas Jefferson was given seeds from the Jardin des Plantes in Paris and wrote that he found the prompt 4 o’clock blossoms “very clever”. Sometime during the 1920’s, for no apparent reason, the plant lost its popularity, but because of its vigor and its ability to prolifically reseed, it sustained itself near the foundations of old buildings and the stone walls of abandoned gardens.

Four O’ Clocks can tolerate many soil types and will grow in poor soil, but they prefer a loamy soil amended with compost. They can prosper in both full sun and partial shade. The plants are usually grown from seed, but they produce tubers which can be dug after the plant dies back in the fall. The tubers can be saved and replanted in the spring. Plant seeds after the danger of frost has passed in the spring. Plant the seeds 1/2 to 1 inch deep. The seeds will germinate in less than 10 days. Thin the seedlings to 18 inches. The plants will begin to bloom in mid-July and will continue until the first heavy frost.