The Zinnia – A Flower for All Gardens 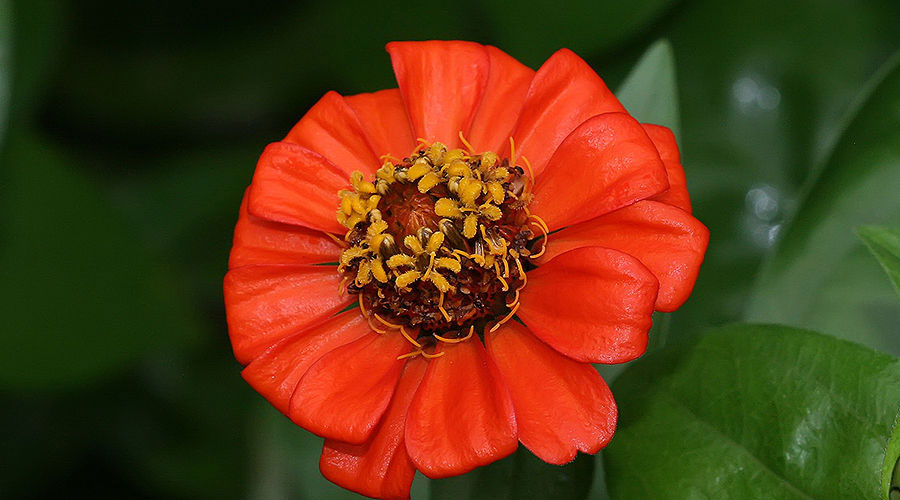 Few plants offer the dazzling array of color choices and large flowers that characterize the Zinnia family. Only dahlias and, perhaps, roses, can compete for size of bloom, intensity of color and showiness. The zinnia asks very little of its garden caretaker and gives so very much. Zinnias can be grown almost anywhere. They are not finicky about soil or water, but they do require full sun. The more you deadhead them, the more flowers they will produce. Japanese beetles do love them, but so do butterflies – lots and lots of butterflies. In mid to late summer, they are very prone to developing powdery mildew on their leaves, but this does not affect their flowers. Spacing the plants 6-8 inches apart sometimes helps, but not always.
A Primer on Zinnias
Zinnias are members of the huge Aster family and are closely related to daisies. They are primarily a native of Mexico where a rambling plant with daisylike orange to yellow blossoms grows, but some forms of wild zinnias have been found as far north as Colorado and as far south as Guatemala. The picture below is actually a picture of a Mexican Sunflower, but the original Mexican zinnias looked very much like this plant.

The first zinnias were discovered in Mexico and brought to Europe by the Spaniards in the 1500’s. Zinnia peruviana was an altogether ugly sight, a sparsely foliated, rangy plant which produced small flowers whose petals were often various muddy shades of yellow and orange. This plant was known throughout Europe by the mid-1600’s, but it was not cultivated much. Dr. Johann Gottfried Zinn of Gottingen University in Germany wrote the first description of the plant and because of this, the zinnia is named for him.

In 1796, a zinnia was brought to Europe, possibly by way of Brazil, (when it was presented to Linnaeus – the great Swedish scientist and medical doctor – it had been labeled Calthe de Bresil, the Brazilian marigold) and it was this zinnia, Zinnia elegans, which the world fell in love with. Zinnia elegans is the ancestral plant from which our modern day zinnias have developed. This zinnia produced larger, lusher flowers in colors which ranged from crimson to pale lavender.
In 1798, the first zinnia seed was offered for sale to the public in the United States. Americans were not interested. The French, however, were becoming interested in the zinnia and by 1856 had developed the first truly double forms of the flower. All of Europe and Great Britain took a liking to the double flowered zinnias and by 1864 purple, orange, red and salmon colored zinnias had made their way back to North America and into the gardens of Americans.

During the early 1860’s, the first dwarf zinnia varieties, Zinnia haageana, made their way from Mexico to the United States. By 1876, the Philadelphia seedhouse, Henry A. Dreer, was offering dwarf zinnia seeds for sale to the public. Persian Carpet, a Zinnia haageana variety, is still available today.

Perhaps the most profound development for the zinnia species occurred when John Bodger of Bodger Seeds Ltd. found a beautiful, natural mutation growing in a field of ‘Mammoth’ zinnias. This zinnia had huge flowers, with an incredible number of petals. The plants were robust and the variety appeared to be stable. Over the next few years, the Bodger seedhouse developed a strain of these dahlia-like zinnias which they called the ‘California Giants’ and introduced them to the world in the 1920’s. America, Europe and Great Britain became enthralled with these lovely flowers and their spectacular array of colors (Zinnias come in every color and hue except blue.), and the rest, shall we say, is history.

Today there are more than 20 known species of zinnia, but only three are commercially available, Zinnia elegans, Zinnia augustifolia, a small daisy-like zinnia, and Zinnia haageana. Zinnia blossoms come in many varieties and are often described in the following way:

Single Flowered – Blossoms have one row of petals and the center of each flower is exposed.

Semi-Double Flowered – Blossoms have several to many rows of petals, but the center is exposed and fully visible.

Fully Double Flowered – Blossoms have many rows of petals and the center of the flower is hidden by the petals.

Cactus Flowered – Blossoms have long petals. The edges of the petals roll under and the entire petal twists to create a unique flower form.
Zinnias are very, very, very easy to grow, but they must have full sun which means at least 6 hours each day. Plant zinnias after the danger of frost is over. Broadcast the seed over an area of freshly turned soil and then rake the seed into the soil or rake a small layer of soil over the seed. My favorite way to plant zinnia seed is to make little holes in the soil with my finger (no more than 1/2 inch deep) about 6 inches apart. I drop a single seed in each hole and close the hole by pressing the soil around it. I always water after I have planted my seed. I find that 6-8 inches between the large zinnia plants produces strong healthy plants and large blossoms. Sometimes this is enough distance so that air circulation around the individual plants keeps the powdery mildew at a minimum. I am not aware of a zinnia variety that is not susceptible to powdery mildew. A slow release fertilizer, 5-10-5, is all you need to feed zinnias well.

The more you cut zinnias, the more flowers they will produce. One thing to remember, certain zinnias fade rapidly in the noonday sun so, if possible, cut your zinnias in the morning.

Zinnias and Containers
All zinnias can be grown in containers. They do very well in small garden environments as long as you practice the following three rules:

1. Give the plants plenty of sunlight.
2. Feed the plants WEEKLY with a full strength, 5-10-5 fertilizer. (No timed release fertilizer.)
3. Keep the plants well watered.

Plant zinnias in containers according to the following formula:

Zinnias and Children
If you want to instill in children a love of gardening, there is no better way to start than by having them grow zinnias. Zinnias are easy to grow, quick to sprout and incredibly colorful. These qualities make them a perfect children’s plant. Plantings of single colors, massed together, work best with children. Scarlet King and Canary Bird are two great varieties to start with, but there are many pinks, purples, oranges and greens to choose from.
Zinnias truly are a flower for all gardens. I have seen zinnias growing in large gardens and small, in the grandest and the simplest of gardens. I don’t have a favorite zinnia, but I have a huge soft spot in my heart for all zinnias. Zinnias were the very first seeds that I planted as a child. I was five years old and my mom gave me a bunch of zinnia seeds. She told me to find something to plant them in. We lived in a row home in Baltimore City with a small, narrow backyard. I found an old shoe box and went to the yard and dug up some soil to fill the shoe box. I put the shoe box up against the house right under the hose spigot so I could easily water my seeds. I sprinkled seeds all over the box and then covered them with more soil. In just a few days, I had a shoe box filled to overflowing with hundreds of tiny green seedlings.

Fifty years later, I can still remember the combination of awe, excitement and joy that I felt watching those seedlings come out of the soil and grow. It was wonderful. When the seedlings were about a week old, my Dad offered to help me transplant them. As he picked up the soaked shoe box, it collapsed and many of the seedlings were lost, but many survived. Together, we transplanted them into the yard and throughout that summer, we picked and picked and picked zinnias. All summer long there was a glass full of fresh flowers in our kitchen window.

That very first experience taught me how abundant life is, how fragile it is and how incredible it is to watch life unfold. From that first, sweet, simple experience with zinnias, came a lifelong love of gardening and a respect for that most precious of gifts – life itself.