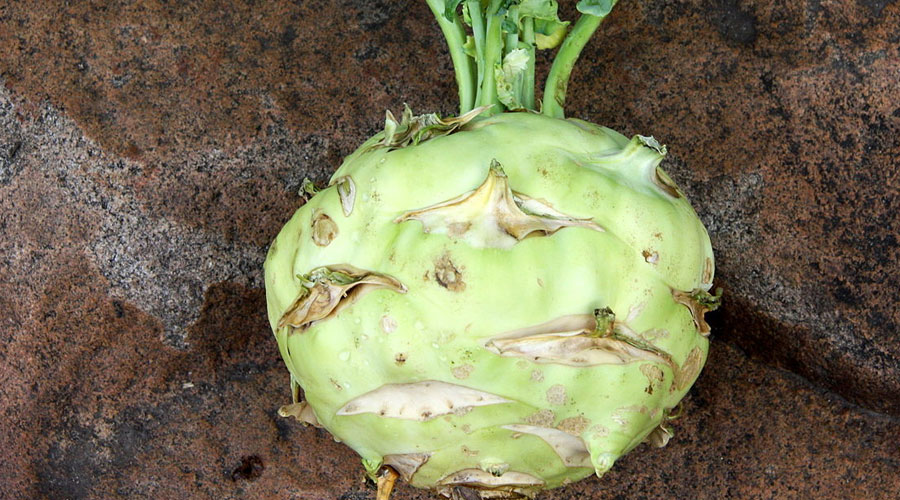 The Kohlrabi – A Little History and Some Growing Instructions

Kohlrabi is yet another member of the ubiquitous brassica family which includes cabbage, kale, collards, turnips, rutabagas, broccoli, Brussels sprouts and cauliflower. Kohlrabi and Brussels sprouts are probably the only commonly known vegetables of northern European origin. Kohlrabi apparently developed from the marrow cabbage a wild form of cabbage which frequently grows on the English channel coast, in European coastal regions and on the Spanish penninsula. The marrow cabbage is a non-heading plant with a thick succulent stem.

The first written record of kohlrabi was in 1554 by the botanist Matthiolus who wrote of the plant that it had “come lately into Italy”. By the end of the 16 th century, kohlrabi was being grown in Germany, England, Italy, Spain, Tripoli and the eastern Mediterranean. There is no record of how the plant got to the Americas, but Bernard McMahon discusses it in 1806. The plant has sometimes been called the “stem turnip”. The name kohlrabi derives from German and means cabbage turnip.

Kohlrabi like many in the cabbage family is a cool season crop and should be planted in the late spring or early summer 8-10 weeks before the first frost date for a fall crop. Seeds should be planted ½ inch deep, 1 inch apart, in rows 12-18 inches apart. Seedlings should be thinned to 6 inches apart. Kohlrabi can be started indoors in flats, 3-4 weeks before the last frost date and transplanted outside for a spring crop. Though kohlrabi thrives best in fertile soil, it can also tolerate average soil. It does not require fertilization, but it does need a consistent supply of moisture.

Kohlrabi should be harvested when the bulbous stems are approximately 2 inches in diameter. When harvested young like this, the inner flesh of the bulb is sweet and the cabbage-like leaves are tender. If left to continue to mature, the flesh of the bulb will become tough and woody.