The Rutabaga and the Turnip 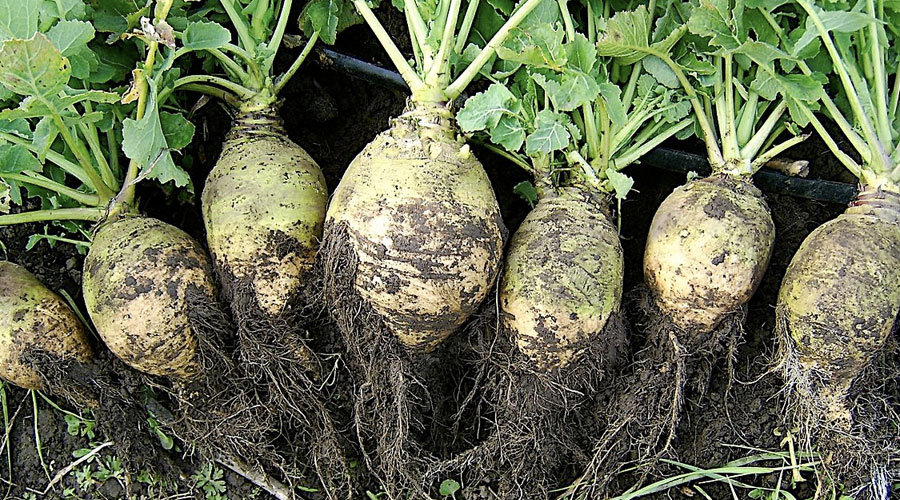 Rutabagas and turnips belong to the brassica family which includes cabbage, cauliflowers, broccoli, Brussels sprouts and mustard among other vegetables. Turnips have been cultivated for thousands of years and are probably native to both Europe and central and western Asia. Rutabagas, which are often called Swede turnips, combine the thick turnip-like roots with bluish green leaves that resemble cabbage leaves. Because of this combination, many have theorized that rutabagas developed as a cross (intentional or unintentional) between turnips and some wild form of cabbage. Since rutabagas are such extremely hardy plants that grow well in Northern Europe and Russia, a hybrid cross could have occurred sometime during the Middle Ages.

European colonists brought turnips to the New World in 1609 and rutabagas soon followed. The colonists did not recognize the rutabaga as a different vegetable. They treated the rutabaga as a kind of turnip. In the 1848 there were listed 8 different kinds of turnips of which the rutabaga was one. It was written, “The Turnip is a biennial plant, growing in a wild state in some parts of England, but better known as an inhabitant of the garden and farm. There are an immense variety: to cultivate all is not so desirable as to plant such as are the more valuable. Those which we deem best for family use are the Early Dutch and Red Top for autumn and early winter supply. The Yellow Aberdeen, Ruta Baga, or Swedish are not so much esteemed in the autumn, but remain firm and solid until late in the spring, (when most other kinds have become pithy) and are then fine. The Large Globe, and Norfolk, and Ruta Baga, are principally cultivated for cattle…”.
Two basic types of rutabaga exist: a yellow –fleshed variety and a white-fleshed variety. There are many different kinds of turnips including purple-topped gold, purple-topped white, yellow, white and golden. Some turnips are grown for their roots and some are grown exclusively for their green tops.

Both turnips and rutabagas like cool weather and the sweetness of both is greatly enhanced by exposure to hard frosts. Both like soils rich in potassium and phosphorus, but not in nitrogen. Adding bone meal and wood ashes to the soil before planting increases the potassium and phosphorus. Turnips can be planted in the early spring for a spring crop and midsummer through early fall for a fall to winter crop. Rutabagas prefer to be planted in mid to late summer for a fall or winter crop. Seed should be sown thinly, about ½ inch deep in rows 12-18 inches apart. Plants should be thinned to 5 inches apart.

Turnip greens and small turnips can be harvested about 30 days after seeding. Turnip roots are most flavorful and tender when harvested young when the roots are 2-3 inches in diameter. Larger turnips become tough and woody. Rutabagas should be exposed to at least 2 hard frosts before harvesting.