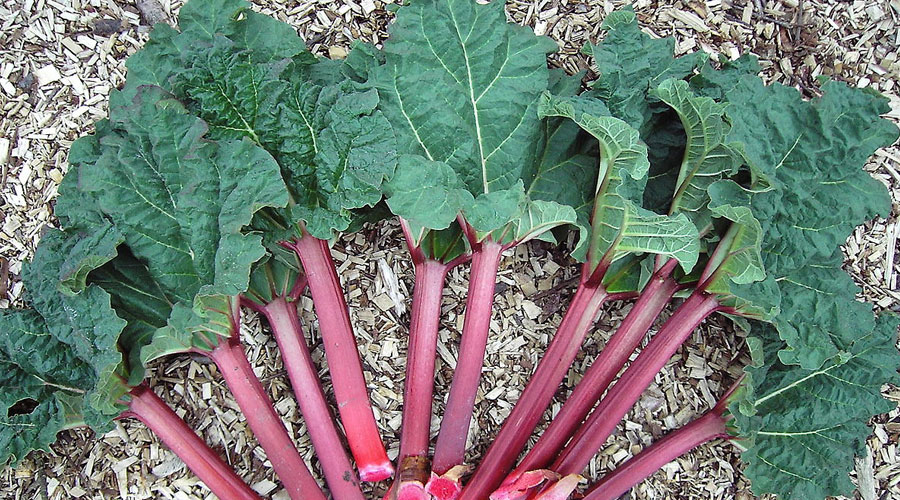 The Rhubarb – A Little History and Some Growing Instructions

Rhubarb is an herbaceous perennial, a member of the buckwheat family. The plant possesses an extraordinary tolerance for both cold and drought. It is hardy to Zone 3 and can be grown in colder climates if mulched. It can adapt to warmer climates where the plants simply die back in summer and resume growth in the fall. It probably originated in the desert region of Siberia around the Volga River Basin. The name, rhubarb, comes from Rha, the name Muscovites gave to the river Volga, and barbarum, a reference to the barbarous people that lived in the region. Rhubarb is also known as “wild strawberry” and “pie plant”. In 1770, Benjamin Franklin who at the time was living in London shipped a crate of rhubarb to Philadelphia to his friend, John Bartram, the preeminent botanist of his time. It is generally agreed that 1770 was the year that rhubarb was introduced into the United States. It was not for another 60 years that the root gained popularity in the US. Some say this was because many folk associated the plant with “tincture of rhubarb” a strong laxative that grandmother might have forced on them.The present variety first appeared in American seed catalogues in 1828.

Rhubarb lasts at least 20 years, so choose a place in the garden where they can remain permanently. To grow rhubarb from roots, plant the roots as soon as the soil is workable. In southern climates, fall planting is also practicable. Dig a series of holes that are three feet apart from center to center. Dig the holes two feet deep and two feet across. Line each hole with 6-8 inches of well-rotted cow manure and then begin to fill the holes with a mixture of equal parts compost and soil. Set the roots, one per hole, so that the tops of the roots lie 3-4 inches below the surface of the soil and finish filling the hole with the soil-compost mixture. Mound the dirt about 2-3 inches above the soil’s surface as the dirt will settle with time and watering. Do not harvest the stalks during the first year. In the fall, mulch with decomposed cow manure. In the spring, remove the mulch, and fertilize with a fertilizer high in nitrogen, then replace the mulch. During the second year, harvest lightly by grasping the base of a stalk and pulling sharply. Do not cut stalks as large clumps left by cutting encourage disease. Beginning in the third year, harvest only for about eight weeks. Immediately after harvesting a stalk cut off the leaves. The stalks will retain their moisture much longer. To maximize the plant’s productivity, at least every five years, the roots need to be dug up and divided.