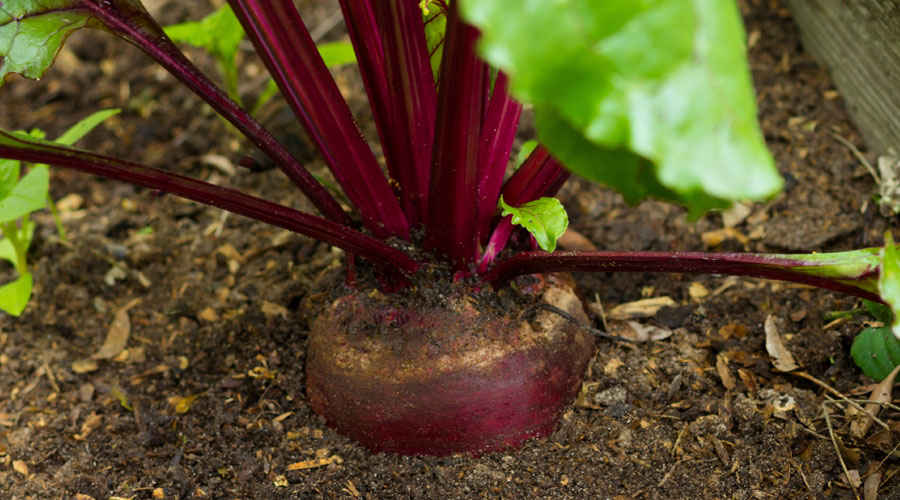 The beet is closely related to Swiss chard, another tall, leafy vegetable. Beet greens have been consumed by man since prehistoric times. The Romans enjoyed them this way and eventually found that they liked the roots when cooked. However, little else is known about the beet. During the 16th century, the beet began to grow in popularity in both Europe and the United States. It was known as the ‘Blood Turnip.’ In the 1848 Landreth Catalogue, six varieties of beet are offered, including three varieties of the ‘Blood Turnip,’ one Swiss Chard, one Silesian Beet (sugar beet), and the Mangel-wurtzel, which is a large-rooted white beet used for stock feeding.

Beets are easy to grow if you remember that they strongly prefer cool or cold temperatures. They make a good early spring crop and an excellent fall crop. They can withstand repeated frosts and even small snowfalls. Beets like sandy, loam soils. They can grow in clay soils, but dense clay soils will produce tough, stringy beets. If the soil is too rich, the beets will go to seed quickly.

In the spring about 2-4 weeks before the last frost and as soon as the ground can be worked, prepare the bed. In the fall, about 6-8 weeks before the first frost, plant your seeds. Mix compost with dried manure or organic fertilizer into the soil, along with some bone meal to encourage root growth. For the home gardener, soak the beet seeds overnight before planting. Beet seeds tend to clump, so plant clumps of beet seeds about half an inch deep, 2 inches apart in rows that are 18-24 inches apart. Once germination has occurred, thin to 3 inches apart. Beets can also be grown in containers. Plant about 20 to a half-barrel and thin to 10 seedlings.

Once the roots have developed to approximately half their full size, cut the tops off and use as salad or cooked greens. If further thinning is required, the baby beets can be cooked or used in salads. Beets are best when eaten young because they tend to toughen with age. Fall beets taste sweeter and store better if they are allowed to experience several light frosts.