The Bean and the Cowpea 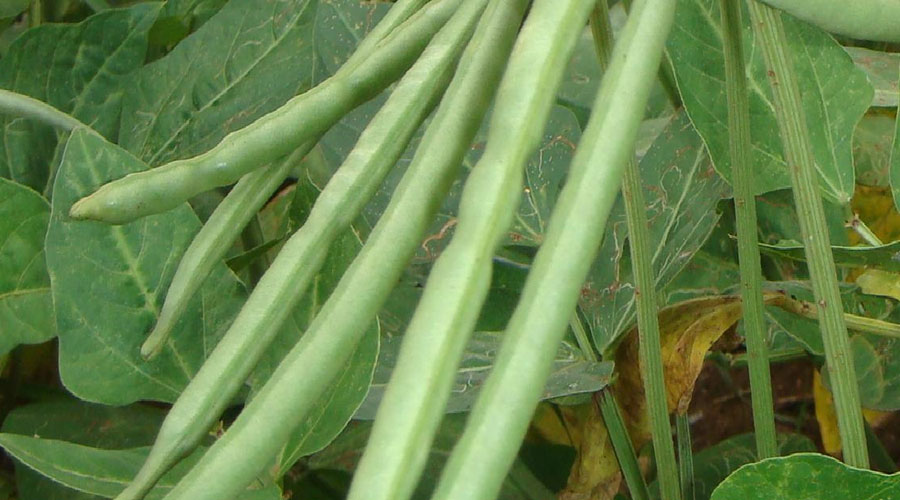 The Bean and the Cowpea

Bean cultivation can be traced to the earliest vestiges of human civilization. Beans may have been the first vegetables that mankind learned to cultivate. Fava beans have been found in Neolithic excavations in Switzerland. Chickpeas, favas, and lentils have been found in Egyptian tombs, and the Chinese started growing soybeans around 1500 BC. However, many of the beans that we are familiar with today, like the common or kidney, lima, and runner bean, came from the Americas and were not introduced to Europe until the time of Christopher Columbus. The oldest archaeological evidence of common beans in the New World comes from Tehuacan, Mexico, and has been radiocarbon dated to 7000 BC. A 1848 seed catalogue featured 18 different varieties of beans – more varieties than any other vegetable.

Beans can be divided into many categories, but for the purposes of this discussion, we are going to distinguish between snap beans, including bush beans and pole beans, fava beans, bush limas and pole limas, runner type, shell bush, and yellow wax beans.

Snap beans are a diverse group of beans that are variously known as common or kidney beans, Haricots, French beans, garden beans, and filet beans. These are the beans that Columbus and Cortez discovered in the New World and introduced to Europe, where they became wildly popular. The term ‘snap’ is not a scientific term. It refers to how the beans are used. They are ‘snapped” from the vine to be eaten fresh or ‘snapped’ in half before being steamed. These beans are eaten in the pod. Snap beans come in about every color imaginable, including white, buff, pink, green, and black. The bush varieties form compact plants, 12 to 18 inches tall. The pole varieties produce vines, which can grow to 10-14 feet.

Fava beans are also known as broad beans. Before the introduction of the snap beans into Europe, the fava was the most widely consumed European bean. Favas are a very ancient variety eaten as far back as the Stone Age. The beans were first cultivated around 4800 BC near Sicily, Italy. The famous Roman family of Fabius derived their name from faba, which is Latin for fava. The fava bean lost favor in Europe after the introduction of the snap beans because of the fava bean’s leathery skin, which must be removed before eating. Fava beans are one of the few beans that can be eaten fresh, as well as dried, and can be ground into a meal similar to cornmeal for making bread. Unlike most other beans, favas will tolerate some frost and prefer cool, rainy weather. Fava beans are huge, about the size of quarters, and range in color from pale green and gold to deep purple. Favas grow on bushes, which reach up to four feet in height.

Lima beans, also known as butter beans, come in large-seeded and small-seeded varieties. They are a very old vegetable found in coastal Peru since 6000 BC. The small-seeded varieties are thought to have originated in Mexico. The large-seeded varieties came from South America. The term ‘lima’ actually refers to Lima, Peru, where it is rumored that an American Navy Admiral was introduced to the beans. He is said to have brought the beans back to New England, where they did not produce well. Somehow, the beans found their way into the Mid-Atlantic, where they did much better in the warmer climate. Lima beans require a long growing season and will not tolerate frost. The beans come in a range of colors from black to purple to red to white. Bush varieties grow on compact plants, 12-18 inches tall. Pole varieties grow on 10-12 foot vines.

Runner type beans are so named because of their incredibly long, vigorous vines that grow up to 20 feet. The half runners are the only runner type beans that have a somewhat compact habit (up to three feet). Runner beans are native to Mexico and Central America. In their native habitats, runner beans are perennials that form tuberous (poisonous) roots. However, in temperate climates, the roots will not survive the winters. Today, most runner beans are grown for their ornamental beauty. Runner vines produce a profusion of pure white, white and red, or deep purple flowers. Beans can be eaten when they are very young or after they have been dried.

Shell Bush Beans are very similar to snap bush beans. The two groups differ only in the time when they are harvested. Shell beans should be harvested when the pods have swelled, but before the beans have begun to dry. This is known as the ‘Green Shell.’ Once shelled, the beans may be cooked, steamed, or baked. Shell beans come in a variety of colors, the most intense of which is probably the vivid scarlet of the red kidney bean. The plants are compact bushes, 12-18 inches tall.

Yellow Wax Beans are named after their light to bright yellow pods and their original waxy texture. Most of the beans are gray to black. Yellow wax beans originated in South and Central America. Wax beans can be eaten fresh, steamed like snap beans, or they can be dried. The beans grow on bushes 12-18 inches high.

With the exception of fava beans, which should be planted as soon as the soil can be worked, all beans require warm soil to germinate. Soil temperature should be near 70 degrees. Beans do best when coated with legume inoculant powder. Legume inoculant powder is a bacterial compound that encourages nitrogen fixation on the roots of the bean plant. Bush varieties should be planted one inch deep and 4-6 inches apart in rows spaced 2-3 feet apart. To produce a longer harvesting season, plant the rows in succession 7-10 inches apart. Bush varieties can also be planted in containers, 4 plants per 18-inch barrel. Pole varieties are best planted, at the base of four 12-foot poles, between four and six seeds per pole. All four poles are 12-15 inches apart and are then tied at the top to form a teepee.