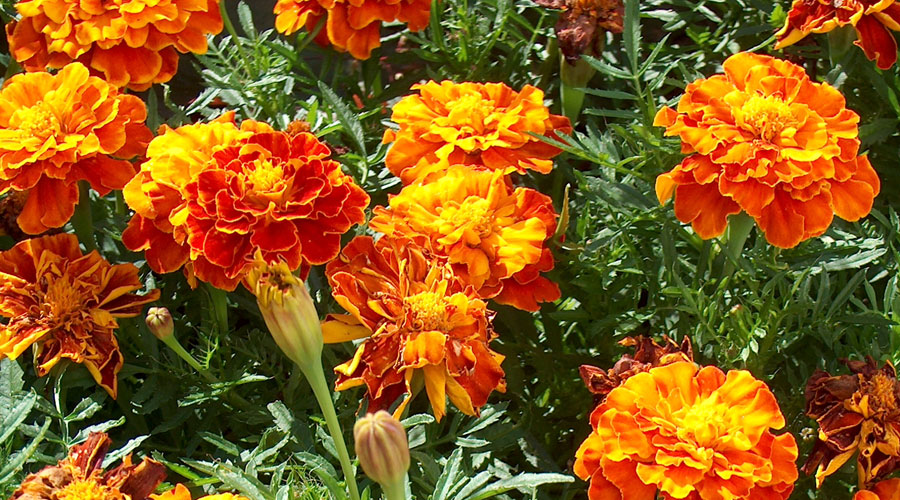 Marigolds, both French and African, are indigenous to Mexico and Guatemala. They were discovered in the early 16th century and brought to Europe and Northern Africa in the late 16th century where they were quickly adopted into gardens. The family name, Tagetes, is derived from a mythical Etruscan deity.

In the wild, the French Marigold, Tagetes patula, is an 18 inch tall, bushy plant with heavily scented, feathery leaves. The flowers are daisy-like and pale yellow. The wild African Marigold is 4-5 feet high with 2-4 inch flowers that vary in color from pale yellow to deep orange.

By the time the plants were introduced into Britain in the early 1600’s, the African Marigold, Tagetes erecta, had naturalized along the North African coast, and it is probably because of this that the British erroneously named the plant the African Marigold. The British called the French Marigold the “Rose-of-the-Indies”. In Spain, the flowers were the favorites to be placed on the altar of the Virgin Mary. Eventually they became known as Mary’s Gold and hence, marigold. In India, the plants grew to have religious significance and became known as the Friendship Flower.

By the early 1800’s, marigolds were also well known in American gardens. Joseph Breck in his 1851 book, The Flower Garden, described the French Marigold as, “…one of the old-fashioned flowers; deservedly popular, from the brilliancy and variegation of its flowers…”. The African Marigold, Breck described in this way, “The large double varieties of this species are very rich. The colors from a pale citron-yellow to deep orange…”

Queen Sophia is an older French Marigold with fully double flower in gold and maroon that was introduced in the early 1900’s. Jolly Jester harkens back to the original wild French marigolds which had single, daisy-like flowers. Sparky was the result of an intensive breeding program initiated in the mid-20th century which produced several fine double French marigolds. Cracker Jack is a double flowering African Marigold that was introduced in the 1970’s.

Marigolds are among the easiest of plants to grow from seed. Seed can be sown outdoors after the danger of frost has passed and covered with 1/4 inch of soil. Germination will take place in 7-10 days, provided the soil is warm 60-70 degrees. The seedlings should be thinned to 4-6 inches except African Marigolds should be 10-12 inches. The plants will begin to flower by the end of June and continue until a killing frost. Deadheading will increase blossoming. The plants are not fussy and will grow in many soil conditions, but they do require full sun.