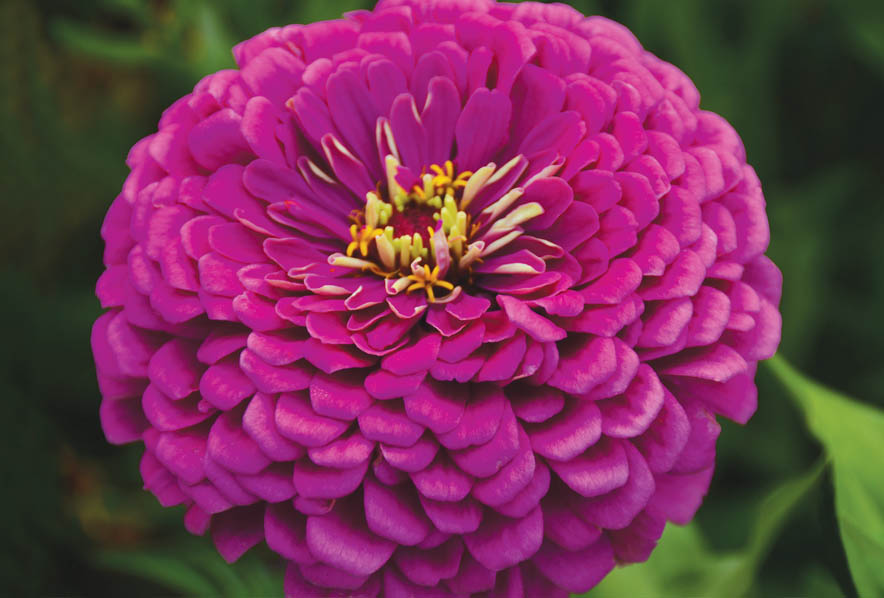 Thank all of you who visited our booths during the 2019 Indoor Flower Show Season, and a special thanks from me, personally, to those of you who cameto thank me for these newsletters. You have no idea how powerful the impact of a simple expression of thanks can be.

Now that spring is really underway in most parts of the country, we are going to publish our newsletters every two weeks. It is time for all of you gardeners to be outside with your hands in the soil and your hearts with your plants. What precious little free time you have should be spent enjoying your gardens not staring at a computer screen.

Flowers have always been used to communicate what words could only inadequately express: joy, love, friendship, grief, sadness, loss. The practice of using flowers rather than words to communicate heartfelt thoughts explodedin popularity during the Victorian Era (1837-1901). It was known as Floriography or Victorian Floriography. Zinnias became a favorite flower for this nonverbal form of communication. Each zinnia color, available during the latter half of the nineteenth century conveyed a very specific message. Five of the six zinnias we discuss in this article were available during the Victorian Era though they may not have been known by the names we have given them today. The sixth zinnia, Envy, was not developed until the 1960s, but it is such an extraordinary flower that we have included it with this newsletter.

Zinnias are members of the huge Aster family and are closely related to daisies. They are primarily a native of Mexico where a rambling plant with daisylike orange to yellow blossoms grows, but some forms of wild zinnias have been found as far north as Colorado and as far south as Guatemala.

The first zinnias were discovered in Mexico and brought to Europe by the Spaniards in the 1500’s. Zinnia peruviana was an altogether ugly sight, a sparsely foliated, rangy plant which produced small flowers whose petals were often various muddy shades of yellow and orange. This plant was known throughout Europe by the mid-1600’s, but it was not cultivated much. Dr. Johann Gottfried Zinn of Gottingen University in Germany wrote the first description of the plant and because of this, the zinnia is named for him.

In 1796, a zinnia was brought to Europe, possibly by way of Brazil, (when itwas presented to Linnaeus – the great Swedish scientist and medical doctor -it had been labeled Calthe de Bresil, the Brazilian marigold) and it was this zinnia, Zinnia elegans, which the world fell in love with. Zinnia elegans is the ancestral plant from which our modern day zinnias have developed. This zinnia produced larger, lusher flowers in colors which ranged from crimson to pale lavender.

In 1798, the first zinnia seed was offered for sale to the public in the United States. Americans were not interested. The French, however, were becoming interested in the zinnia and by 1856 had developed the first truly double forms of the flower. All of Europe and Great Britain took a liking to the double flowered zinnias and by 1864 purple, orange, red and salmon colored zinnias had made their way back to North America and into the gardens of Americans.

Joseph Breck in 1830 in the first book ever written about American flowers, Breck’s Book of Flowers, wrote,

“The colors of some of the varieties are very brilliant,
and particularly thescarlets. The colors are white
pale to dark yellow, orange to scarlet; shades from
rose to crimson, from crimson to light purple, lilac, etc.”

In 1856 the first dwarf varieties were introduced to Americans, but it wasn’t until 1920 that the zinnia really began to enjoy nationwide popularity when John Bodger, one of America’s greatest seedsmen, introduced the dahlia-flowered zinnia. Years before, Bodger had discovered a naturally occurring zinnia mutation which bore a lush, fully double blossom in one of his fieldsof ‘mammoth’ zinnias. The Bodger Company worked on further developing this mutation and began offering seeds for sale in 1920. 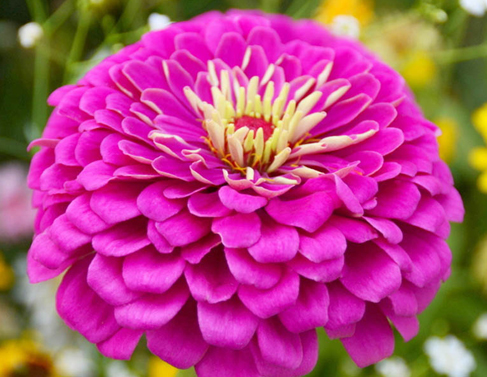 Violet Queen is an old variety, California Giant Zinnia, with a striking magenta to reddish purple color. The blooms are 3-5 inches in diameter. The plants will reach a height of 30-36 inches. Zinnias were often worn or given as gifts during the Victorian Era. The magenta zinnias conveyed a message of lasting affection and were often presented by a young man to his lady love. 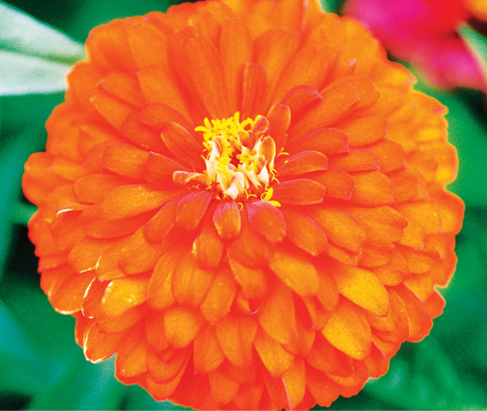 Orange King is a large, California Giant zinnia in a bright, intensely orange color. In today’s market, orange zinnias are rare, yet orange is one of the dominant zinnia colors when the plant appears in the wild.

In Victorian times, the Orange Zinnia expressed thoughts of friendship and was often given as part of a mixed bouquet of zinnias.

Orange King plants range in height from 30-40 inches. The blossom is 5-6 inches in diameter and fully double. This zinnia like all of the zinnias offered at Harvesting History is always open-pollinated which means that the flower shape, size and color will vary substantially. This is a stunning plant to include in your garden. As it blooms it will grace many vases in your home. 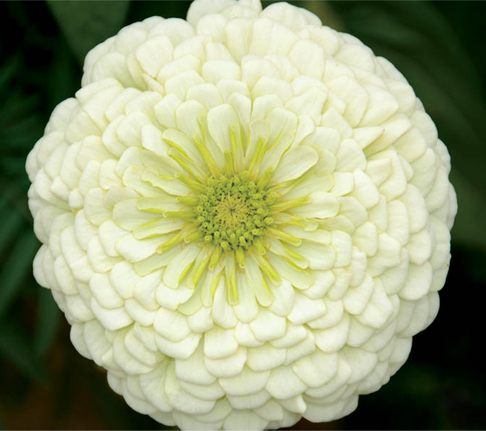 Purity White, like Violet Queen, is an old fully double California Giant Zinnia with blossoms that are typically 3-5 inches in diameter. The plants will reach a height of 30-36 inches. Purity White is the whitest of the white zinnias, but she has a lime green center and her petals are slightly cream colored.

If picked early in the morning Purity White is nearly white. However, the longer the sun shines on this flower, the creamier the petals become. During the Victorian Era giving a white zinnia meant that the giver believed the giftee was a good person. 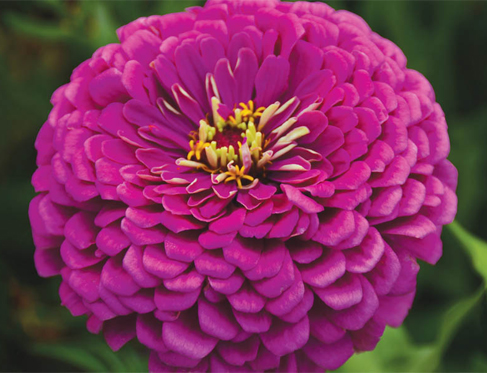 This is a “take your breath away” flower. The huge (5-6 inch), fully double, strikingly purple blossoms are magnificent. The plants range in height from 30-40 inches.

In the language of Victorian Floriography, the Purple Zinnia conveyed “thoughts of an absent friend”. Like the Orange Zinnia it was often part of a bouquet of zinnias of mixed colors.

One cautionary suggestion – most soils contain so much iron that it reddens Royal Purple and the blossom is often a deep magenta. To insure achieving the royal purple color, you need to add alumina sulfate to the soil – similar in practice to what gardeners do with hydrangeas to get the blue blossoms. 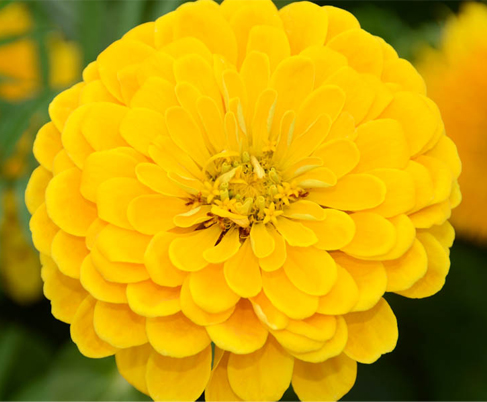 Canary Bird is a brilliant, sunshine yellow, California Giant zinnia with blossoms that reach 3-5 inches in diameter. The plants are 30-36 inches tall. The intensity of the yellow color does not seem to fade in the sunlight and the fully double blooms are quite opulent.

During the Victorian Era giving a gift of yellow zinnias conveyed a message of daily remembrance – a lovely thought especially if presented to an older person or a child. 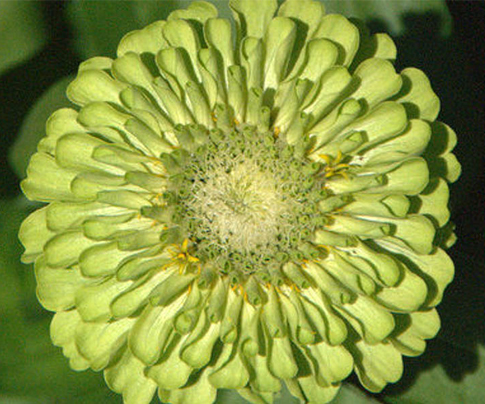 The story of the Envy Zinnia is a story of commitment, passion and perservance. For decades Bodger Seed and several other American seedhouses sought to develop a truly green zinnia. None had much luck until Bodgerfound a promising mutant in the late 1950s. By the early 1960s, Bodger introduced the truly green zinnia, Envy and it was an instant and sustained success. This zinnia could hold its own against some of the most dramaticcolors in the zinnia world.

The fully double blossoms are a pale, but undeniably green. Average blossom size is 3-4 inches in diameter. The plants reach a height of 30-36 inches.

The most important factor to remember about this zinnia is that the blossoms should be cut in the early morning before 10:00 AM. Envy blossoms tend to fade quickly in sunlight and will become a less than delightful yellowish green. If harvested in the early morning, Envy retains its bright green color.

For more than 120 years, American seed companies advised their customers to plant Zinnia seed around the 4th of July. This is actually very good advice. Zinnia seed germinates best in warm soil. By warm, we mean soil that is warm to the touch when you poke a finger down 2-3 inches. Warm soil causes the seed to germinate very rapidly, 1-5 days. The seedlings also grow rapidly and can begin to produce blossoms in as little as 3 weeks. The best news of all is that Zinnias, when planted late, often do not get powdery mildew or the powdery mildew shows up late in the fall. In Zones 4-7, Zinnias can be planted as late as the 3rd week in July and still produce an abundant crop of blossoms. In Zones 1-3, Zinnias planted in early June will be flowering by early to mid-July. In Zones 8-10, Zinnias can be planted in March for May flowers and again in August for September through December flowers. 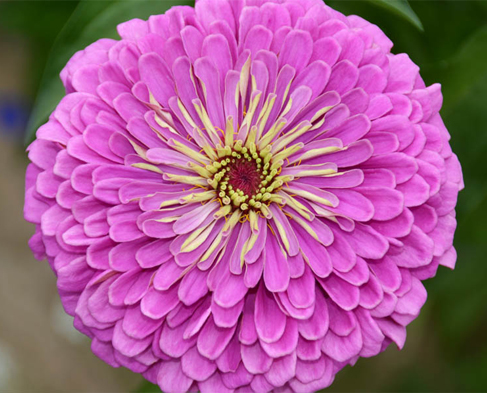 Zinnias LOVE containers! They produce the most impactful presence in a container garden when single colors are planted in individual pots. For example, a pot of yellow zinnias positioned next to a pot of magenta zinnias and a pot of green zinnias is much more attractive to the human eye than three pots of mixed zinnias.

We recommend planting zinnias in 10-12 inch diameter pots – 8 to 10 zinnias to a pot. They should be fertilized using a blossom booster fertilizer every 2-3 weeks and the blossoms need to be removed from the plants as soon as they begin to fade. If you do not remove the blossoms, the plants will stop producing flowers.

Of all the flowers that a child may grow, in my opinion, the zinnia is the best. It is incredibly easy to grow. In warm soil, the seeds will germinate in 2-3 days and the brilliant colors will inspire the imagination of any child.

For school teachers, starting zinnias in February-early March, in the pots they will be permanently grown in, in your classroom will produce blossoms by the end of the school year. If the plants are cared for throughout the summer, they will make an extraordinary “Welcome Back to School” in the fall.

Few plants offer the dazzling array of color choices and large flowers that characterize the Zinnia family. Only dahlias and, perhaps, roses, can compete for size of bloom, intensity of color and showiness. The zinnia asks very little of its garden caretaker and gives so very much. Zinnias can be grown almost anywhere. They are not finicky about soil or water, but they do require full sun. The more you deadhead them, the more flowers they will produce. Japanese beetles do love them, but so do butterflies – lots and lots of butterflies. In mid to late summer, they are very prone to developing powdery mildew on their leaves, but this does not affect their flowers. Spacing the plants 6-8 inches apart sometimes helps, but not always.