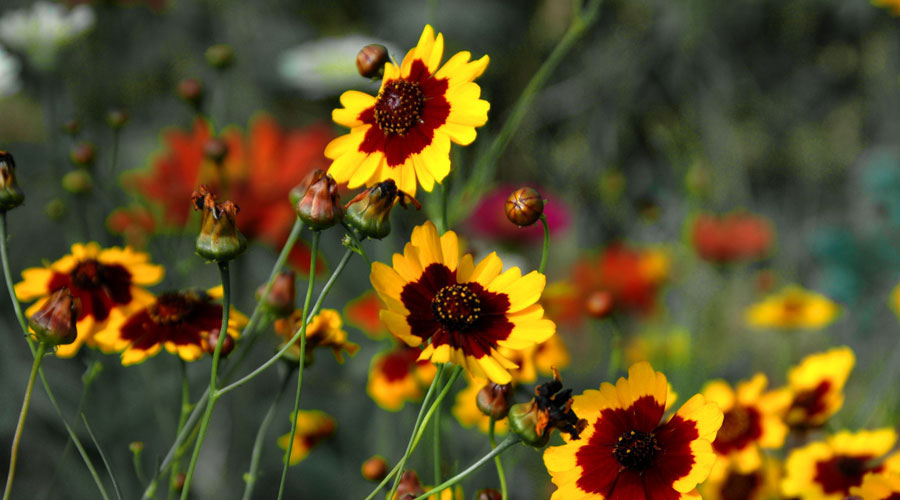 Coreopsis (Calliopsis) – A Little History and Some Growing Instructions

Coreopsis which was once known as Calliopsis and is sometimes known as Tickseed is a member of the Aster family. The plants are true native Americans being indigenous to the prairies and woodlands of North and Central America and Mexico. This is one of the many plants, named and described, by the Lewis and Clark Expedition of 1804-1806.

Plants identified by Lewis and Clark were sent back to the Bernard McMahon Nurseries in Philadelphia. The nurseries were charged with making the seed or plants available to the American public which they did. By 1851, when Joseph Breck wrote his book, The Flower Garden, the plant was well known. Breck writes, “Calliopsis tinctoria – var. atropurpurea. – Dyeing Calliopsis, dark-flowered variety. – This variety of the well known and much admired Coreopsis Tinctoria is very superior to that species. The flowers are about the size of C. tinctoria; the centre is yellow, surrounded by a circle of dark purple, beyond which, to the extremity of the petals, is of a fine red scarlet color; some of the flowers are destitute of the yellow centre. It is a splendid flowering annual, and deserves a place in every flower-garden; we have grown it in masses, and it produces a fine show.”

Coreopsis can be grown easily from seed by broadcasting seed in spring after the danger of frost has passed. It is recommended to succession plant this flower for a continuous bloom from June to frost. Deadheading is also recommended to prolong the blooming period. Seeds should be covered with 1/2 inch of soil. Seeds will germinate inless than 2 weeks. Plants require full sun, but may tolerate partial shade. Thin plants to 8 inch spacing. Coreopsis is known to reseed.