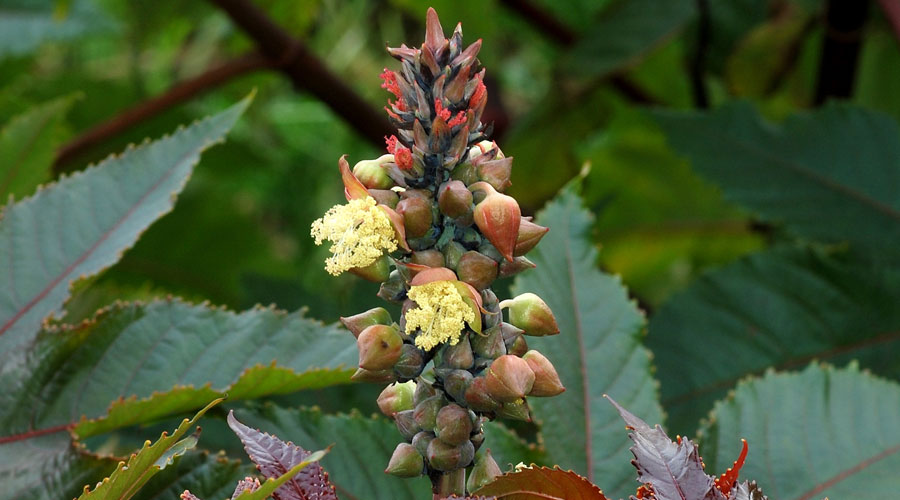 Castor Beans (Ricinus) – A Little History and Some Growing Instructions

Castor Bean is an annual native to the southeastern Mediterranean and East Africa. Its Latin name, Ricinus, means tick because the seeds are said to resemble a blood filled tick. It is an ancient plant that has been cultivated for thousands of years and considered by many civilizations to be an important medicinal herb. Seeds have been found in Egyptian tombs dating to 4000 BC. The Greeks and the Romans used the oil for wound healing, but the Greeks believed that the oil should only be used externally. In the Middle Ages, the Europeans used the oil as a kind of liniment and also as a lubricant. In the 18th century, the extraordinary capabilities of castor oil as a laxative were discovered, and with this discovery, the plant’s popularity exploded. Thomas Jefferson wrote about the plant in his garden book and today the plant is prized as a garden ornamental.

Despite its poisonous qualities, the Castor Bean plant is a much beloved member of the garden. Sometimes towering 8-10 feet, the stems which bear a profusion of huge, red-veined leaves lend a tropical ambiance to any garden. The plant is grown for its height and its leaves. The flowers are much less dramatic. It is also said to prevent moles and voles and to discourage other rodents, specifically rabbits and mice.

The plant can be grown easily from seed. It requires full sun. Plant the seeds 1 inch deep in rich, well-drained soil. The seeds will germinate in less than 2 weeks. The plants will probably need frequent watering, and like a nitrogen rich fertilizer. Mature plants will require at least 30 inches between plants. Some old-time gardeners recommend planting a living fence of Castor Bean plants around the vegetable garden. This, they say, will keep out all of the varmints.