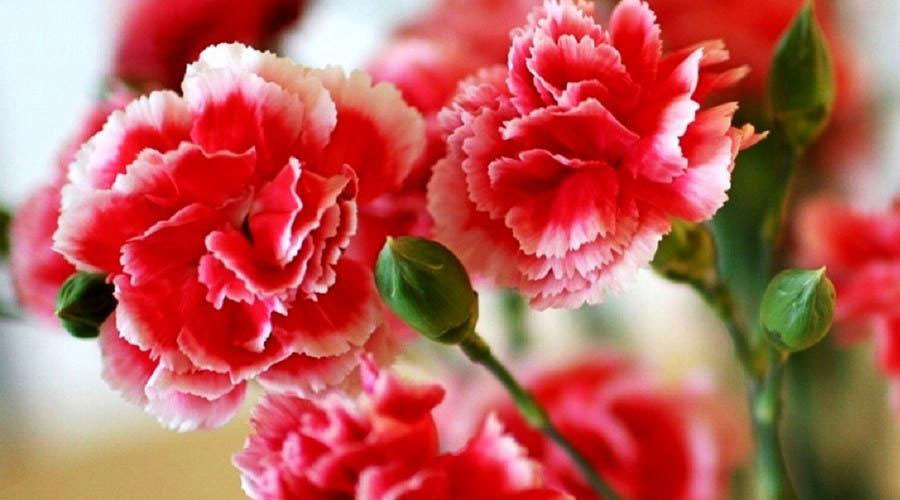 Carnation – A Little History and Some Growing Instructions

Carnations, members of the Dianthus family, specifically Dianthus Caryophyllus, have been cultivated for at least 2000 years. It was the Athenians that named the flower Dianthos, from the Greek words dios (devine) and anthos (flower). Gillyflower, another name by which the plant is known, probably came from the French who called dianthus, gelofre. Carnations probably originated in the Pyrenees as single flowered specimens, but none of these naturally occurring, single, wild varieties exist today. The beauty of its flower, its longevity as a cut flower and the ease with which it could be cultivated combined to give it instant popularity in many, many cultures.

Early on, the plant was subjected to massive breeding programs and by the early 1700’s there were single, semi-double and double carnations available in crimson, blush, purple, red, scarlet, white and tawny colors. There were also striped, stippled, spotted and veined carnations with smooth or picoteed petal edges. Many of these hybrids were divided into very specific classes: Bizarre, Flake, Flame, and Picotee. The Bizarre Flowers were double or striped or variegated with four distinct colors. The Flakes were striped with only two colors. Flames were red flowers striped with black and The Picotee Flowers were white and spotted or splotched with scarlet, red, purple or other colors. Sadly, these breeding programs sacrificed the fragrance for which the flower had originally been coveted for blossom longevity. As cut flowers, the blossoms of carnations are nearly everlasting.

Joseph Breck in his 1851 book, The Flower Garden, proclaimed, “There is no flower more desirable in the flower-garden than the Carnation. A well-grown, superior variety, cannot be surpassed, in elegance, beauty, or odor by any other flower…” Breck also went on to give evidence that Carnations were, generally, not very stable when grown from seed and described in detail the much preferred method for producing new plants, known as layering, saying, “The propagation of the Carnation by layers is a very simple operation. When the plant is in perfection of bloom, lay around it one and a half or two inches of compost, first gently stirring the surface so that it may combine; remove the lower leaves of the shoots selected; pass the penknife, slanting upwards, half through the joint; fasten the shoot, where so cut, about two inches under the surface, with a small hooked peg, bending it carefully so as not to break at the incision; then fix it firmly by gently pressing the earth around with the fingers, and finish by cutting off about half an inch of the upper extremities of the leaves with scissors. The sap soon begins to granulate at the wound, and throw out shoots. In about a month or six weeks, if it has been kept moderately moist, they may be severed from the parent plant and established for themselves;”.

The Chabaud variety introduced by a French firm in 1870 is still considered one of the best carnations ever developed. Vita Sackville-West, the reknown mid 20th century garden writer, proclaimed the Chabaud strain superior above all other annual carnations.

Carnations started from seed are best started indoors 6-8 weeks before the last frost. Cover the seeds with about 1/4 inch of soil and keep the soil slightly moist throughout germination and indoor growth. The seeds will germinate in less than 2 weeks. The plants require full sun except in the deep South where they do best in partial shade. They like rich, sandy loam soil. Plants should be about 12 inches apart. Flowering begins in July.