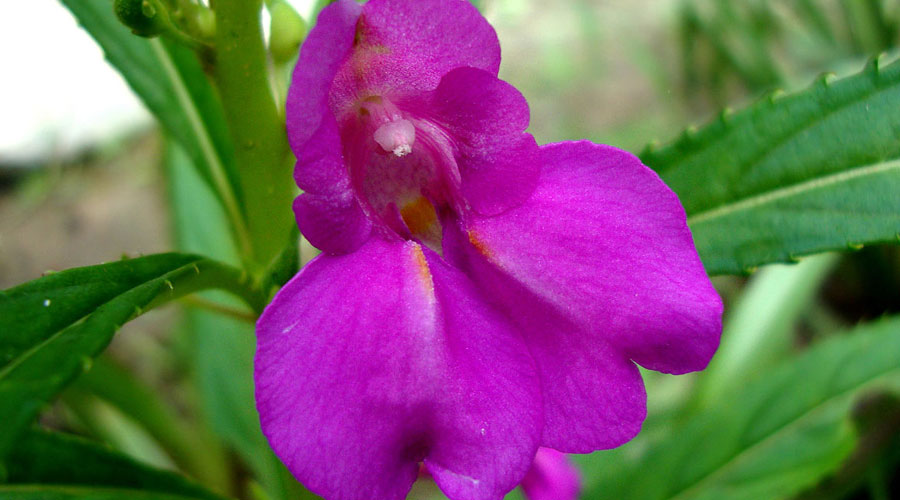 Balsam – A Little History and Some Growing Instructions

Joseph Breck, in his 1851 book, The Flower Garden, notes that the plant was also known as “Touch-me-not”. He wrote, “The Double Balsam is one of the most prominent ornaments of the garden, in July and August. Old seed is considered by some to be the best, as more likely to produce double flowers. The seeds should be saved from double flowering plants only; all single flowering ones should be destroyed as soon as they appear…If the soil is rich and a little moist, or supplied with moisture, the plants will attain a monstrous size, and be completely covered with a profusion of flowers all the season. All the full double varieties are beautiful; the colors are crimson, scarlet, light and dark purple, rose, blush, white &c.; some produce white and red or purple flowers on the same plant; others are variegated, or spotted with various shades of red and purple, which are decidedly the most elegant…”

Balsam Camellia was introduced in 1863 and enjoyed great popularity as a Victorian garden flower, but in the 1900’s, balsams lost favor with gardeners and today in many parts of the country, balsams are difficult to find.

Balsams grow easily from seed and can be started indoors or direct seeded outside when the danger of frost has passed. Plants from seed started outside will not bloom until late July or early August. Pants started indoors may bloom as early as late June. The plants continue to bloom until the first frost. Seed should be planted to a depth of 1/4 inch and mature plants should be spaced at 6-8 inch intervals. The seeds will germinate in less than 2 weeks. Plants can tolerate partial shade or full sun. They are not drought tolerant and they wither in intense heat, but recover quickly. They are beautiful plants and deserve a place in the gardens of the 21st century.