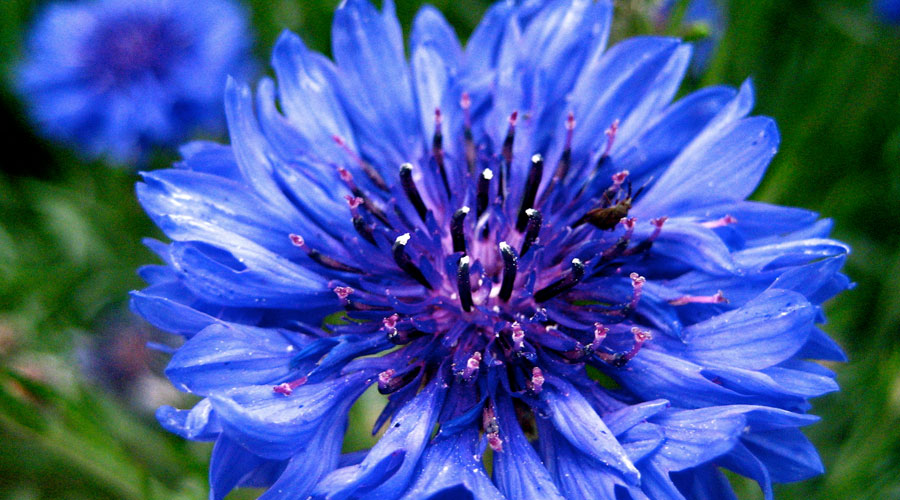 Bachelor’s Button –  A Little History and Some Growing Instructions

Bachelor’s Buttons, also known as Cornflowers, are the bluest of all the flowers in the garden and blue is the rarest of the colors offered in nature. The plants are native to Europe and Asia. Tutankhamen, the Egyptian boy king, was buried with a wreath around his head of cornflowers, olive leaves and water lily petals. Centuries ago they were so abundant in Europe that entire fields were covered with the flowers. The Latin name, Centaurea Cyanus, refers to the mythical centaur, Chiron. Legend has it that Chiron, the half man-half horse creature, used cornflowers to heal himself after he was wounded by a poisoned arrow in a battle with the mythical Hydra.

They were introduced into the United States in the 1600’s.The name, Bachelor’s Button, may have arisen during Victorian times when the flowers were often placed in the button holes of men’s suitcoats. In his 1851 book, The Flower Garden, Joseph Breck dismisses them as a common weed known as Blue Bottle which though originally blue is now available in white, pink, purple and parti-colored rays. Breck instead focuses on an American native Centaurea, Centaurea Americanus. He describes this plant as “A handsome hardy annual, discovered by Nuttal, on the alluvial soil of the Arkansas and Red rivers, two or three feet high, with large purplish-pink flowers in August.” Despite Breck’s disdain, Bachelor Buttons grew in popularity in the US and have remained a staple of the American garden even today. The bluest of the old varieties, Jubilee Gem, was introduced in 1937, and the red bachelor button, Red Boy was introduced in 1942.

Bachelor Buttons are easily grown from seed. They require full sun and are drought, heat and soil tolerant. Seeds should be sown in the spring when the danger of frost has passed. Broadcast the seed over an area and then cover with no more than 1/4 inch of soil. The plants will germinate in less than two weeks and should be thinned so that the distance separating mature plants is 12 inches.