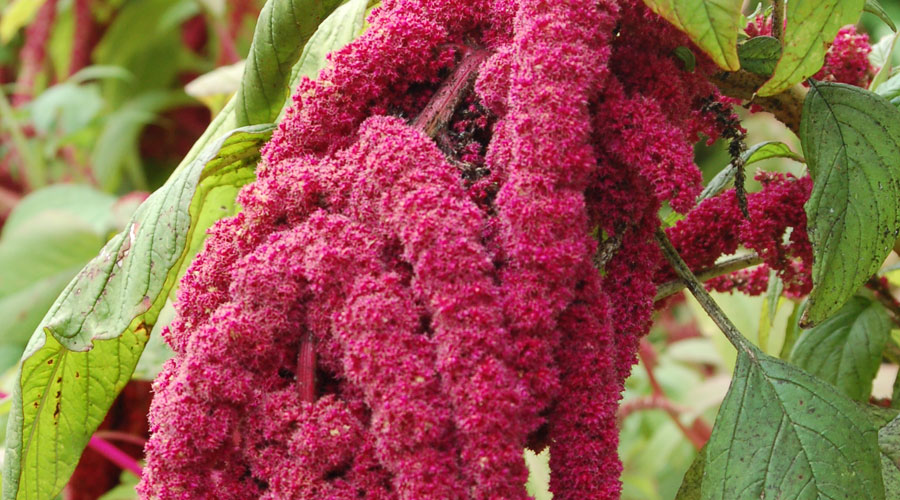 Amaranthus  - A Little History and Some Growing Instructions

Amaranthus comprises a family of about 60 species of annuals or short-lived perennials that were originally native to parts of South America, Africa and India. The plant was introduced into the United States during the 1700’s. In his 1851 book, The Flower Garden, Joseph Breck was already describing Amaranthus as “an old favorite of the flower-garden”. Amaranthus Caudatus Red also known as Love-Lies-Bleeding, Velvet Flower or Tassel Flower, Amaranthus Tricolor also known as Summer Poinsettia, Chinese Spinach or Joseph’s Coat, and Amaranthus Hypochondriacus known as Prince’s Feather are three of the most famous species

Amaranthus Caudatus Red was popularly known as “Love-Lies-Bleeding” by 1665. The name Amaranthus means “never waxing old” and referred to the beautiful, chenille-like plumes in burgundy or greenish-yellow that the plant produced. These plumes could be dried for ornamental purposes and seemed to have an everlasting quality about them. Breck described the plant as “three to four feet high with red flowers which hang in pendant spikes, and, at a little distance, look like streams of blood… It is sometimes called, in France – the Nun’s Whipping-rope.” Breck also mentioned the greenish-yellow variety but disdainfully discarded it as “too mean-looking for the flower-garden.” Because of the everlasting quality of its plumes, during the Victorian era, when it had reached the height of its popularity, Amaranthus Caudatus Red began to be used as a funerary flower and so became associated in many minds with death. This unfortunate association caused its popularity to diminish and by the mid-20th century it had disappeared from many gardens.

Amaranthus Tricolor is an ancient plant that was revered for its ornamental and edible qualities. Seeds dating back 10,000 years have been found at Mexican archaeological sites. It is known that the Aztecs ate the leaves with honey and for centuries Asian and African peoples used the leaves as a spinach substitute. The 3-4 foot plant with its incredibly colorful leaves in scarlet, magenta, yellow, chartreuse, and/or gold became a Victorian garden favorite.

Amaranthus Hypochondriacus is native to the Southern United States as well as Mexico, India and China. The tall upright crimson to purple plumes were long valued for their nutritious content as well as being dramatically ornamental. John Tradescant (1585-1652) the great British plant collector is believed to have introduced Amaranthus Hypochondriacus into Great Britain after a collecting trip to the US in the mid-1600’s.

Most amaranths are easy to grow from seed. Sow the seed, once the soil temperature is above 70 degrees, and cover lightly with no more than 1/4 inch of soil. Seeds will germinate in less than 10 days. Amaranths must have full sun, and they will wilt easily if it is too dry. The Victorians fed their plants generously with manure and the result was extremely tall amaranths with plumes that dangled far above the heads of garden visitors. The individual plants should be planted no closer than 18 inches apart, and show best when planted as a group of at least three. Plumes begin to appear by mid-summer and will continue until the first frost. If picked before the frost and allowed to dry, the plumes make dramatic dried flowers.